We usually think of a flush as making things in water go away. Not so, with steelhead. I just got off the horn with fishing guide Tom Farnum for a rundown on river conditions.

We had a real warm spell recently with a big runoff, jumping the Grande Ronde from around 2,000 cfs up to the 20,000 cfs neighborhood in short order. That’s really holding the handle down, as flushes go.

Flows are now just under 6,000 cfs, which Tom thinks is on the big and fast side for fishing the Grande Ronde around Troy. Especially if you’re going after it with a fly rod. So Tom’s expecting that surge of water to draw steelhead upstream, and puts his money on the Wallowa and Imnaha Rivers. He’s gearing up for exploratory missions so watch the Winding Waters fishing report for an update.

Meantime, if you’ve forgotten what fish look like, this here specimen was coaxed in some months ago by Jake, one of Tom’s longtime clients and friends from Darby, Montana. 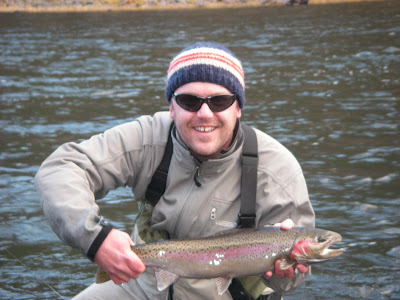 O yeah, and Jake is a chef. He can turn fresh-caught keeper steelhead into a masterpiece dining experience. I once got in on a spicy Mexican steelhead creation of his that is difficult to describe, but ‘fantastico’ comes to mind.

Took a trip over to southeast Oregon last week. They’ve had water on the move over there. This well-hydrated tree is between Burns and Vale. 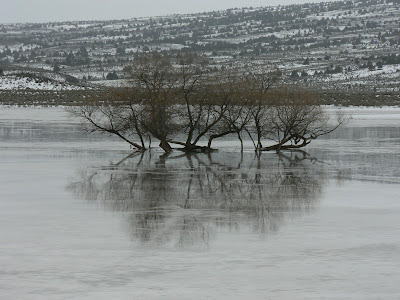 And apparently the Bulldogs did good. 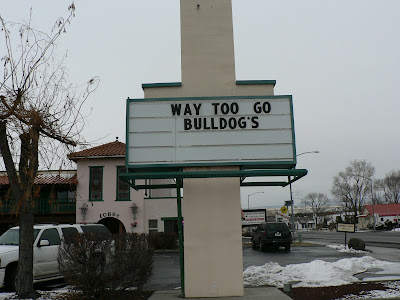 I’m guessing it wasn’t in a spelling bee, though.

And in this week’s episode of ‘Self Portraits Taken In the Window Of a Truck In Your Driveway For No Good Reason, Really,’ we find a good example of Team Winding Waters being a bunch of pals.

It’s like a Where’s Waldo game of finding the connection to my rafting buddies. First off, Paul fitted out our crew with those spiffy Patagucci jackets. Todd is to thank for the groovy birch stick railing in the background on my porch. And Morgan Jenkins, king of the thrift store, found that llama wool knit hat for a mere 25 cents then let me talk him out of it . . . 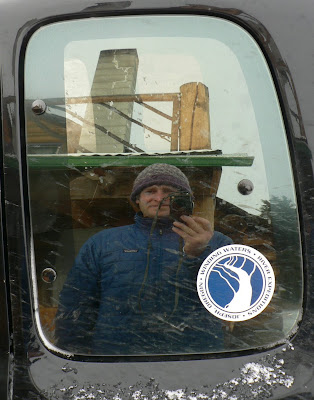 . . . I put the mud on the window of that Toyota Tacoma all by myself.

Send me your self-portrait taken in the reflection of something with a Winding Waters sticker on it and qualify to win fabulous prizes, including a smile from baby Linden, sent via overnight mail before it has a chance to wear off.