Where 2 inches feels like 6. Where kids learn to ski, grownups can act like kids and even bare dirt on the hillside can’t slow down the end-of-season festivities.

Minor adjustments were made to the schedule of events. The downhill race was less speed-oriented and more a matter of adapting to the conditions. Whoever managed to get the furthest down the hill won. I do believe that was Rock Thies, who has been on something of a tear lately, what with a string of snowboard race victories and prying the lawnchair race trophy from Paul Arentsen’s sled last year.

To recap: last year we had snow. I reverse-engineered Paul’s championship design and Paul was out of town, signing Ben Hayes as backup lawnchair driver. Ben and I met on the hill. It did not go great. Here’s a link to how that went down.

So I bent my chair back into shape, added some reinforcements and should have added wheels too. 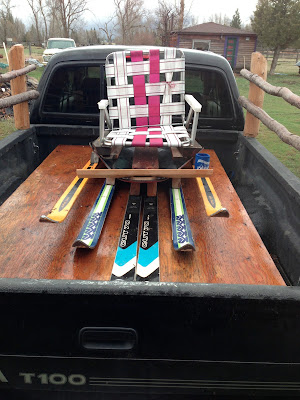 The field went from probably too many last year, down to four. Defending champ Rock. Timm Turrentine. Dave Carpenter in some contraption on loan from the Muppet Show, and me.

Timm sort of won. If deciding to take off whenever you feel like it counts as an official start. But the rest of us were marshaling our energy to drag our sleds through the mud, so I’m OK with it.

As always, the Fergi faithful arrived to tip their hat once again to a beloved little community ski hill.

Melting snow means rafting season, so I look forward to my first sunset on the river in Hells Canyon or along the banks of the Salmon or Grande Ronde, reclining in a camp chair that isn’t bolted to skis and/or strapped to a snowcat.