All Steelheaders On Deck

[Update to the update….It’s back on. We had that surge but the Wallowa has already settled back into green and fishable….gauge at Troy is reading 4,400 as of Sunday morning, after jumping up to around 10,000….steelhead magic 8 ball says: all signs point to yes.]

[Update….a sad one, but with the promise of a bright spot….windy and warm conditions jacked the Grande Ronde level from about 1,500 cfs to 6-thousand in 24 hours. So, uh, all this stuff below about it being go-time is on hold for now. But. When she settles down there should be a slug of fish that have moved up the system.]

Ahoy, fishers – it’s go-time. It’s happening. Wallowa River and Grande Ronde steelhead are opening their mouths to take in items that have hooks concealed within.

For proof, we go to the photo file from fishing guide Tom Farnam’s recent successful Wallowa River exploratory mission (special thanks to the thoughtful outdoorsman who left the Keystone can on the bank so Tom could use it for size comparison . . . we’ve made about two bucks so far this fishing season picking up these mementos). 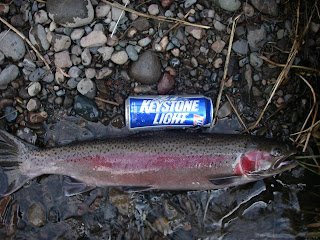 Creel report indicates 1.7 hours per fish, or roughly 8.3 Keystone Lights if that’s how you keep track.

Paul has a full rundown on Tom’s very good day over at the Winding Waters Fishing Report.

Tom landed two hatchery fish that day and kindly left one at my house, where it was transformed by my homemade smoker and secret brine recipe into smoky steelheady deliciousness. Mira – 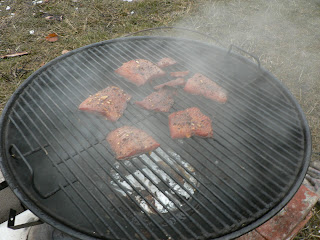 Lots of real estate available on that grill….but I have plans to pack it in there next round.

Like to build your own smoker for zero dollars? Well, then it’s time for another episode of Jon’s Handyman Corner.

For this project you will need –

A neighbor named Carla who has an old plug-in electric cooktop she lets you have.

An old Weber barbecue with one handle missing (see photo).

An apple tree you can cut limbs off.

A recipe for the brine, which you should disregard and substitute whatever you have lying around the kitchen. I threw in some pineapple juice and molasses curveballs along with the standard mix of kosher salt, worchesterhoweveryouspellit sauce and brown sugar and so forth.

Look online for a full recipe, but be prepared to wade through many versions. Smoking fish, it turns out, is one of those battlefield topics where people have definite, fixed notions and get their dander up if you deviate from their view. Type of salt, type of wood chips, how much heat, how long, blahty-blah.

My first batch turned out pretty good and once I get things nailed down I’ll unleash my own recipe upon the world.

Meantime, soak your fish in the brine overnight. Crank up your homemade smoker by placing wet chips in foil with vent holes….add more chips after about an hour. Pull it after three and you’re in bidness.

My quest to add more steelhead to the smoker had mixed results this weekend. I hooked one, had it on long enough to be smiling wide, then it moseyed downstream on me and I stood there thinking I could impose my will over the wild things, which was not the case at all. There was tension and then there wasn’t. Just slack line, billowing back toward me like a gentle slap. This was followed by a moment of silence, then a series of cracking noises as my heart broke into nine hundred and eighty-three tiny shards.

But I dusted myself off after a little cry and hooked another fish not too long after. Behold – 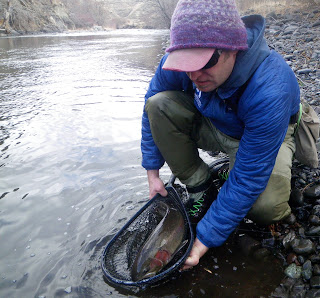 “Whatever you do, fish, don’t just jump out of the net I’m holding at the perfect angle for you to jump out of.”

That’s me, urging this wild fish to unhook it’s teeth from the net. It did occur to me I should get a grip on the tail if I was going to get a picture, but these thoughts were interrupted by this – 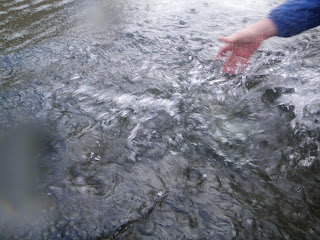 Aaaaaand, back you go.

Special thanks to Fishtrap Writer and Fly Fisherman In Residence Cam Scott for the outstanding camera work on capturing that exciting release. Cam is a professional, so he didn’t seem phased at all by my unorthodox methods of letting fish go before I got them to the bank, or not holding it up once I did get one to the bank.

So the Wallowa is fishing good and I also hear that the Grande Ronde near Troy was producing steelhead this past weekend.

Make a list of all the things you should be doing, crumple that in your fist and place it in your barbecue, which will be used later if you follow my instructions for smoking the steelhead you will be catching.

Also enter the Winding Waters steelhead hotline into your speed dial (877) 426-7238 and get on the river with guide Tom Farnam who, legend has it, surgically added a steel plate above his frontal lobes so he could think more like a steelhead.

One more thing: click the Winding Waters Steelhead 101 for a great primer on the Wallowa County flyfishing scene.

That about covers it. Now if you’ll excuse me, I’ve got to go tie some more Rombach Specials, which are unique fly patterns that rely heavily on the theory that ugly, unlikely objects send steelhead into a rage, provoking strikes. 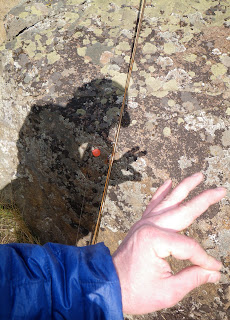