Saw a diving bird come up with a fish on my last jaunt down in Hells Canyon with Mike Baird and the Forest Service cleanup crew.

Never seen this particular collection of feathers before in Hells. Long neck. Biggish. About the size of two-and-a-half ducks glued together. There was another bird of the same persuasion floating nearby, they took off and split up to lose us, I guess, with one of them keeping pace with us as we went upriver, doing, I don’t know, 30 miles-an-hour? We were moving pretty good and I tried to get photos to ID the thing but they turned out to be a blurry mess.

So I’m laying claim to the discovery of a new bird in Hells Canyon: The Blurry Mess. Identified by not being able to identify it. Inhabits crappy photos taken by amateur photographers.

One guess for this fisher bird was green heron. Most pictures of green herons I found look nothing like what I saw, but this one here looks about right: 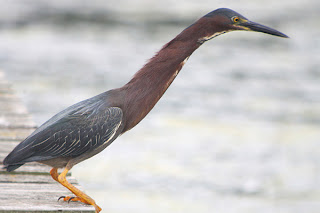 I don’t see any green, but I’m no ornithologist.

There’s a bird checklist for Hells Canyon put out by Idaho Power. Here’s a link if you’re interested. They don’t mention green herons, but I don’t suppose birds consult bird books to decide where they can and can’t go.

The Hells Canyon bird list does mention a black-crowned night heron, which is mostly white and doesn’t look at all like what we saw.

I know one thing for sure – The Green Heron will probably be a movie soon. After the Green Hornet and Green Lantern, The Green Heron is a natural progression. He’ll swoop down on criminals, poop on their car and eat all the koi out of their pond, if they happen to have a koi pond. Otherwise his crime-fighting tactics are fairly limited. But that’s still a better storyline than most Hollywood superhero films. Could have been a cormorant we saw, but I don’t know. So I don’t know that Idaho Power should update their bird list to include green herons, but I have here a photo taken at Coon Hollow on the lower section, and do not see pink plastic flamingos listed anywhere on the Idaho Power bird list. Might want to update that, Idaho Power. 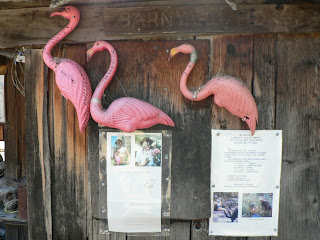 They’re very tame. You can sneak right up on them. 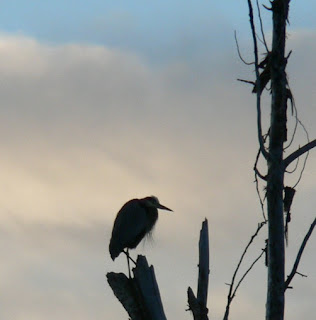 Here’s the same bird, without the zoom – 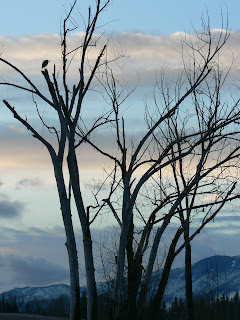 These last two photos were taken from my yard. Friends sometimes ask when I’m going to move from the Wallowas and go live in the city. If they find me a log cabin apartment with a view like this and I can take pictures of herons from my yard that I don’t have, I’ll consider it.

Mike Baird said his students were asking questions in his classroom that he didn’t have answers for. Like, why are we in school when we should be out sledding because this should be a snow day. So Baird got on the horn to one of his science contacts who explained the numbers related to a chinook.

I didn’t take notes, but basically there’s high pressure and low pressure and air comes off the mountains and slides down into a valley, heating up around 5 degrees for every 1,000 feet it drops.

So the Wallowas are up in the 9,000-ish foot neighborhood and the floor of Wallowa Valley is around 4,000. Air slides down, heats up, we get rain instead of snow, then it freezes later, turning my driveway into a skating rink, causing me to slip and fall on my can the other night.

But the pressure zones seem to have evened out, the ski run has been in action and the mountains are storing up future whitewater for rafting season.

Call or email to set up your rafting trip on this snow, once it gets around to melting.

And bring your birding book and binoculars. We’ll search for the elusive green heron.