Catching Steelhead on the Wallowa and Grande Ronde

I feel like I’m a mill worker in Pittsburgh, seeing all this steel come off the line recently. Here’s three fish tales. True ones even.

One man. One fly. One steelhead. 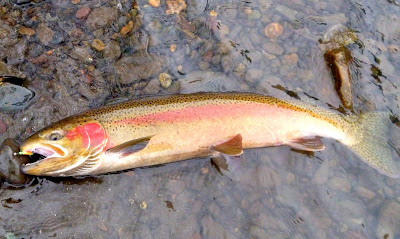 Mike Baird got a snazzy chest pack for his fly fishing gear as a gift from his daughter last Christmas.

It’s the essence of convenience and utility. Perfect for having everything you need at the ready in a nice, compact, tidy unit. It’s all right there at your fingertips.

Unless your fingertips are at the river and the gear bag didn’t make it into the truck.

That was the situation Mr. Baird was facing on Sunday. Makes the trip to the river, looking at steelhead water, no fly box.

Some would curse in this situation. Mike probably did, I don’t know.
But he did have one fly on his rod still rigged up from his last outing. Go home and fetch his gear? Nay. He fished his one fly, caught a whitefish and that wild male you see above.

Where did he get this magical fly, you ask? Who could have crafted such a reliable work of functional fish-catching art? Baird said it was a Rombach production and I should tie up some more of these. I zoomed in on the picture to see what I had done and I have to admit, that doesn’t look like something that came off my vise. But I’ll go ahead and claim it anyway. 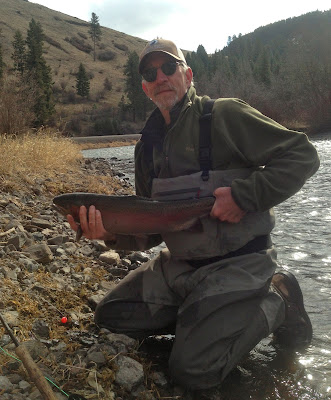 This first fish here took up 28 inches of tape for length and I wish we’d measured for girth because this lady was packing more eggs than . . . you know, like a . . . like an . . . egg truck or something that packs lots of eggs. That one got away from me. Stupid analogies.

Then Tom had the audacity to land this next submarine of a steelhead right where I could see it happening. Go around the corner if you’re going to do that, Farnam. Geez. 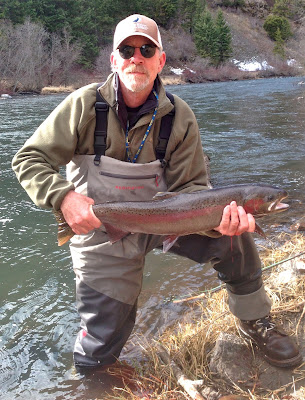 I did catch a decent sized bull trout that day. No steelhead, just the bull trout. Don’t know if it was my fly selection, which was a tiny red cape, or the fact that I wore my “suit of lights” waders that day. They’re sparkly, with a bunch of bedazzled gemstones.

Got down to the Grande Ronde with Paul “Winding Waters” Arentsen and Jeff “District Fish Biologist” Yanke over the weekend. It’s lucky for both of these guys that their nicknames ended up also being their job descriptions.

The GR has been creeping up on the flow and the visibility wasn’t great. Under a foot, I’d say. But it’ll settle.

We hooked up with this bright 25-incher on a nymph. 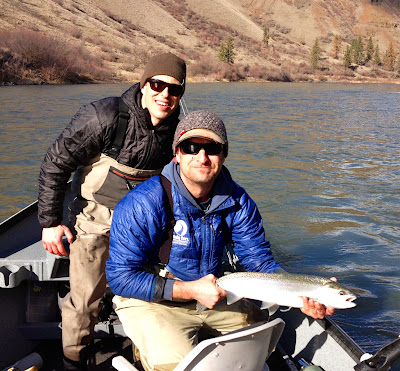 Jeff landed a beauty of a large rainbow, some good-sized whiteys and a trophy suckerfish. 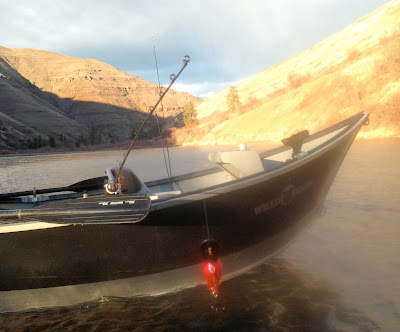 Got another snapshot for the coffee table photography book I’ve been working on. It’s called !@#$%^&* Power Poles (working title) and features beautiful landscapes with powerlines ruining everything. Going to be a bestseller for sure. 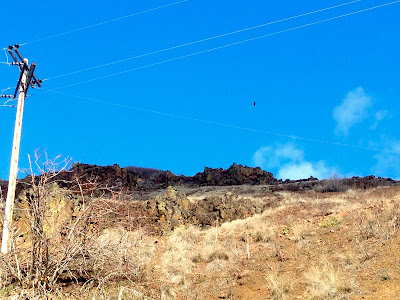 That little black dot in the photo above is a bald eagle. Or a Freedom Eagle, as I like to call them.

Numbers of steelhead for this run are down from average, but that’s not stopping the ones that are here from engaging with a fly. Also, the fish this year are considerably larger than normal. Somebody I’ll call ‘Ahab’ reported catching a 34-inch steelhead in Wallowa County water recently. That’s a lot of inches.

Want to get in on this action?

Call Paul Winding Waters Arentsen for guided steelhead trips. Fish by the day or go big with a four or five day float down the Wallowa and Grande Ronde. You can have the full guide treatment on the extended trips, or guide yourself with friends on the supported steelhead trip, rolling into a cushy camp each night with deluxe meals and all the comforts taken care of.

This is also a great time for booking spring and summer float trips on the Snake River in Hells Canyon, Lower Salmon River and Grande Ronde. If you’re itching to get on the river, Winding Waters is ready to scratch.