Hells Canyon got spiffed up last weekend when a Forest Service cleanup crew scoured the banks at popular campsites to remove plastic in many and various forms, bunches of wire, odds, ends, a pair of blue swimming trunks and a few other things we don’t need to go into. 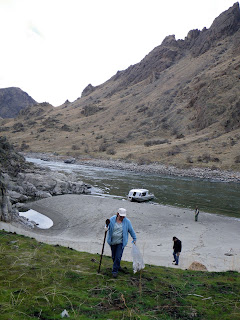 Mike Baird and I went along as volunteers and it was unique both to be down on the Snake River in January and also see it by jetboat, rather than raft. Landmarks come at you awfully fast when you’re accustomed to seeing them from a floating pace. 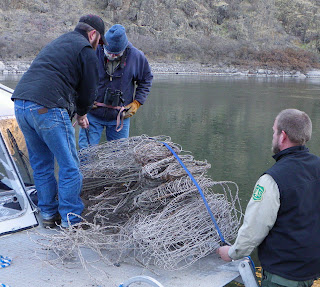 Strapping down part of the haul.
That’s Ranger Brent in the foreground.

Wildlife sightings were fast and furious. Maybe not furious. They were mostly flying by or grazing. One thing I’d never seen in Hells Canyon were elk. Seen acres of elk sign in the spring. Evidence. Beds. Droppings. But never the actual elk until this trip, when several herds were doing their thing. 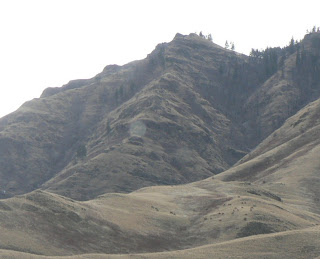 Little brown dots near the bottom represent elk.
My zoom can only do so much from a bouncing jetboat.

The eagles were thick down there. Bald and golden. Looked like a political ad with all the eagles flying around, being majestic and whatnot. Also herons, horned owls, wild turkeys, deer, bighorn sheep. All of that.

And possibly, just possibly, a calling card from a wolf. You be the judge: 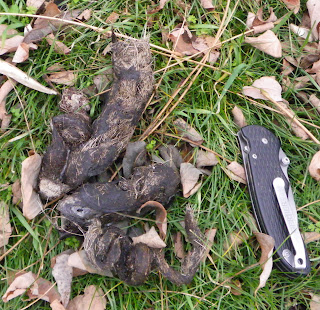 Whatever creature left this came very close to pooping on my knife.

We stopped in to visit the caretakers at Cache Creek. Nice couple from Estacada. They drew our attention to an intriguing pile of poo behind the house that sure appears to be a contender for having been left by something larger than a coyote. Chupacabra? Wolf?

I asked the internets about wolf doo-doo and it said woofs leave number twos that are generally larger in diameter than one inch, tapered at one end with hair and bone fragments from prey. Coyote poo will be shinier than wolf poo . . . the last time you learned this much about byproducts you swore never again to feed your infant asparagus pureed with blueberries and mandarin oranges.

That pocket knife in the photo measures 4 1/4″ long x 1 1/4″ at the widest spot. So according to the cap of my pen that I held up to the screen for scale, Exhibit P hovers around 1″ in diameter and so it could go either way: Coyote that could use more prunes in the diet or a wolf that didn’t use the groover. Or a very large dingo. Never know.

As for the placement of this specimen right behind an old ranch house next to the Snake River in Hells Canyon, here’s a snippet from the ODFW site: “Both wolves and coyotes leave scat in prominent places along trails and roads to mark territories and leave scent behind. It is a form of communication with other wolves and coyotes.”

Piles of poop as a form of communication. Reminds me of the exciting junk mail offers I receive in my mailbox.

Here’s an interactive game for you. See if you can spot hoo is hiding in this photo. 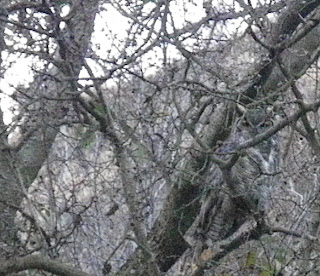 He just finished a Tootsie Pop before I snapped this picture.

It was really quite nice down in Hells Canyon for January. Sweatshirt weather during the day and impressive stars at night. Dusting of snow way up high and it got me looking forward to being back on the water.

The first slot on my calendar for launching a boat will be a steelhead float in early-spring, fishing the 38-mile run from Minam down to Wildcat Bridge above Troy. I aim to tussle with some steelhead in the roadless section and I need to start losing some of these flies I’ve been tying up all winter.

Want in? Check out our supported steelhead trips where Winding Waters provides all the comforts and you just worry about catching fish.

And remember, friends, Pack It In, Pack It Out. I don’t mind doing some cleanup now and then, but it doesn’t take much to clean up after ourselves.

Now, if you’ll excuse me, I’ve got to go tend to the mountain of dishes in my sink.