Ahoy. Wallowa Valley is bursting with our typical magical March weather. By that I mean it seems like February. On a scale of being cold or not, it’s pretty cold. But there are hints of warmer weather. I ran into Jim Shelley in the grocery store and he said he and Anne just got back from Mexico.

From a fishing standpoint I’ll take the cold to fend off more snowmelt and river blowoutage. We had a bout of warmishy weather with a dump of wet snow and bushels of rain last week and just look what it did to the Grande Ronde River – 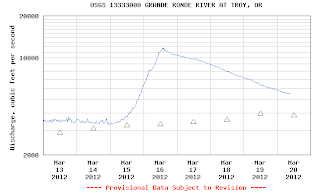 It jumped up like a third-string basketball player in the quarter finals of the championship when the home team has a commanding lead and the coach sends in even the waterboy so things don’t turn into a rout.

That meant a downtick in the steelhead fishing and brought on such alternatives as reading dogeared fly fishing magazines, tying a bunch of ugly flies, I don’t know, maybe ordering a new fly rod.

Good idea. I believe I will order a new fly rod. Here it is. A ten-foot 7 weight Ion from Echo. 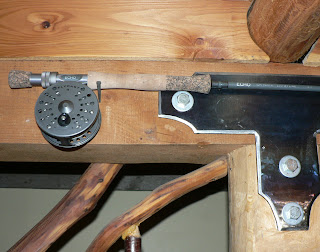 Farnam convinced me the added length of a ten-footer would bring all sorts of advantages with line control, high sticking, getting caught in the brush hiking to the river. The ladies would suddenly pay attention to me, no more sand kicked in my face. I was sold.

So far I’ve made some outstanding casts, if I do say so, to various gopher mounds and clumps of grass in my yard. I look forward to trying this thing on the water. More to the point, I look forward to a stress test with a Wallowa River or Grande Ronde steelhead attached to the other end.

And we’re taking steps to make that happen. Paul, myself, Mr. Mike Baird and a cast of bandits are embarking this week on a run from Minam to Wildcat, the same stretch we do for supported steelhead trips where you do the steelhead fishing and we do everything else. Except this time we’re doing the fishing too.

If that aggravates you and you want to be catching steelhead all day with your new fly rod and then sitting in a warm wall tent at night, playing poker with a full house up against a three of a kind your brother-in-law Chad is betting furiously, then you need to visit the Winding Waters Steelhead Support page.

It’ll be good to trot out the rafts for the first float of 2012.

Doing the weapons check for this upcoming trip got me replacing a fly line that’s become a little haggard.

To do this, you should first take off the bread sack twisty things and allow the line to explode on the floor in a Gordian nightmare. It will look something like this – 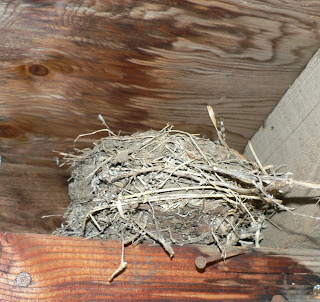 Take an hour or so to untangle it and remain calm by breaking a lamp, putting your foot through your TV, whatever works.

Now we’ll tie the Nail Knot, a process that was developed during the Spanish Inquisition.

You will need an instruction book, the patience of a thousand-year-old tree, one bottle of bourbon, a short piece of drinking straw (for the knot, not the bourbon), scissors to trim the ends, ice for the bourbon, a thesaurus to look up four-letter words once you run out of your own and smaller fingers than mine.

That list may seem long, but take into consideration that you won’t need the scissors because you’ll never get to that stage.

Now, here are the handy instructions – 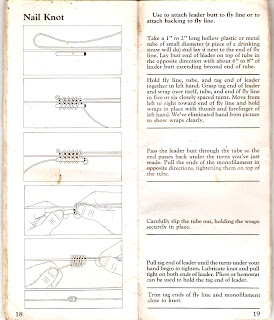 Looks simple. And it is, if you add my extra step of giving up on it and using an Albright knot instead.
Hope that’s helpful and we’ll see you on the river.