Dropped and Found and Lost Again

*some know it as Horse Creek*

*depending on where you’re from

I’ve never claimed to be the most coordinated fella, but I used to think I could manage fundamental motor skills. Like wading in a stream. Sadly, this has been proven not to be the case, in a somewhat spectacular fashion. 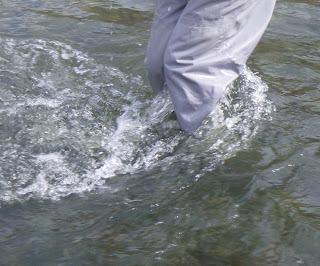 Pictured: Wading. Notice how everything above the knees is also above the water.
That’s what you’re after. Jot that down.
Had another memorable Wallowa County steelhead trip to the Imnaha River with Dave Kesey the week before the closing bell . . . I should probably point something out here, as “Dave Kesey fishing” became rather a popular internet search following Mr. Kesey’s letter in his local paper where he suggested new fishing regulations on the Owyhee River.
The response to that was something to behold. It blew my hair back just reading the comments. Hoowee. So if you got here by searching for “Dave Kesey fishing” hoping to find evidence for the various wrong theories about Dave that materialized after that brouhaha, I’m sorry to disappoint. This is just a happy place on the internet where we talk about fun stuff like whitewater rafting and fishing on rivers around here – which are spectacular, by the way. The Snake River in Hells Canyon, the Lower Salmon, Wallowa, Grande Ronde and Imnaha. Beautiful. Ask Dave, he’s been on most of these.
So anyhoo, Dave is not a fishing guide, nor is he a secret agent for Boise fly fishing clubs, or any of the other interesting tales put forward by people named Anonymous in the comments on that newspaper item.
What you need to know here is that Dave’s just a nice guy that likes to fish. A lot. And he’s quite good at it. He seems to be able to summon fish. He’s a fish-catching machine. Fish after fish. It gets old pretty quick.
So he hooks another steelhead down there on the Imnaha – big surprise – and I go to help land the thing. Try. I go try to help land the thing.
Here’s the stupid fish that threw me in the river. A 31-inch wild Imnaha River steelhead that fought like Bruce Lee and ran like Mary Decker Slaney in the ’84 Olympics and stripped line like a . . . like a . . . thing that metaphorically strips a lot of line. 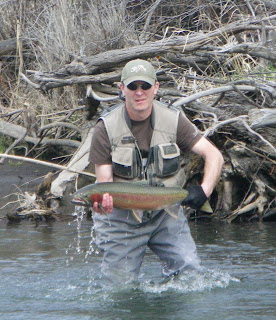 I named this fish Zola Budd.

Dave hooks it. Plays it. Brings it in. Out it goes. Back in. Takes off again. This happens enough that we realize this fish has more octane than most. At that point I jogged up to the nearby truck to fetch the net. Then the trouble started.

I can walk, people. I’ve got some balance. Here’s me playing “Gunslinger” on a sandy beach along the Salmon River. It’s a fun game. Requires balance. Coordination. I do OK. I challenge you to a best two-out-of-three next time we’re on a Winding Waters River Expeditions trip. 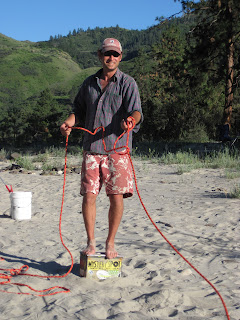 Here’s further proof I can manage one foot in front of the other – an Instagram photo of me walking with my dog, Boo. Look at that poise, that balance. 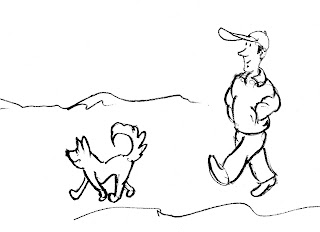 I even placed fourth last year in the IronUncle 5k Toddler Relay Endurance Race, where you swim, run and bicycle while carrying a child who needs a nap. It’s one of those fringe extreme sports. 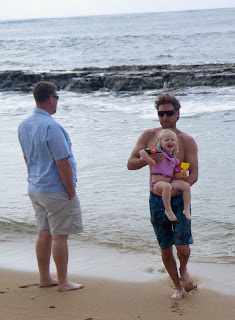 The guy in the blue shirt is a referee. Also Anna’s dad.

But Dave’s fish takes him down to the head of a riffle and it’s obvious we need to land the thing now before it gets in the fast water.

I’ve got the long handle net in my hand. It’s black with red accents on the handle, if you happen to have found it and want to collect the reward. A nice net. Coincidentally, it was a gift from Dave and his brother Fargo on an earlier trip that involved my birthday.

In the act of lunging for the steelhead, in a blur of splashing water I jump into action, stumble, fall and throw the net in the river. Just like that. It was beautiful, except the reverse.

The worst part is, I look up and Dave is running after the net in knee-deep water – running – still keeping his rod tip up and playing the fish while charging through the Class I rapid I was supposed to keep us out of.

So I feel bad and shout that I’ll get the net, he should play the fish.

But I take a couple steps and give up, whereas Dave had been gaining on it. Yeah.

I don’t know. It was the most amazing display of badness I can recall in long while. Bad balance, bad motor skills, bad timing, judgment . . . just spectacularly bad.

Dave lands the fish after chasing it through a raging torrent. Or manageable knee-deep water, depending on your perspective. Here’s another look at that magnificent stupid fish that tripped me. 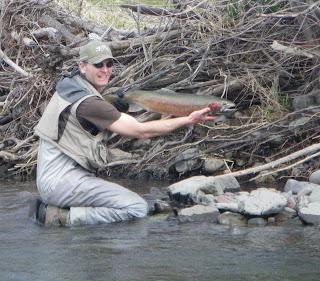 After that debacle I decided to make up for things by leaving Dave stranded for an hour to go recover the net. Drove downstream and saw it bobbing above another small rapid. I got below, waded out where I was sure I’d fall again and waited for fifteen minutes but never saw the net again. It’s either sunk on the bottom or floated out to the Columbia by now.

So if you found that thing let’s talk ransom.

In other news: let’s go rafting. It’s far more enjoyable to float over rapids than walk through them so I’m jazzed that boating season is upon us. We’ve had some gorgeous weather out here in the Wallowas and I can hear my grass growing.

Pick your trip from the Winding Waters rafting vacations and we’ll get down to business by wagering on games of Gunslinger. Let’s say 25-cents per round. If my luck holds I should be able to pay the ransom or buy a new net after the summer.