Super good fun up at Fergifest again this year. I stopped being optimistic about my chances in the lawnchair race years ago, so that was a load off my mind.

Once again, I built my racer the day before and had no idea how it would ride. But I did take the liberty of ripping off Paul’s design, which has dominated the NasChair racing circuit for several years, so when I shoved off from the starting line I felt good. The sled was heading for the barn in a straight line and me and my 6 skis were pointed for greatness. 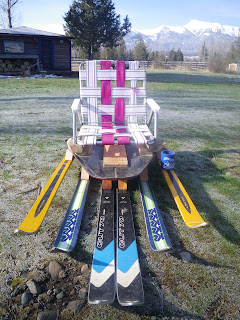 Pictured: Greatness.
And then Rock passed me. And Ben came in from the left. Or I came in on Ben’s right, however you want to look at it.
Paul was out of town so our amigo Ben Hayes took over pilot duties with the championship lawnchair racer. And . . . well . . . check out the video and see how that worked out.
Sorry, Ben. Tried to throw in an evasive maneuver but it wasn’t happening.

Rob Taylor not only won 5 bucks betting against me, he came up afterward with this news: “Rombach, man, you’re too old for this . . . what are you doing?”

Last week of steelhead season and the rivers have cooperated by dropping and clearing up, so get out there and make us proud.