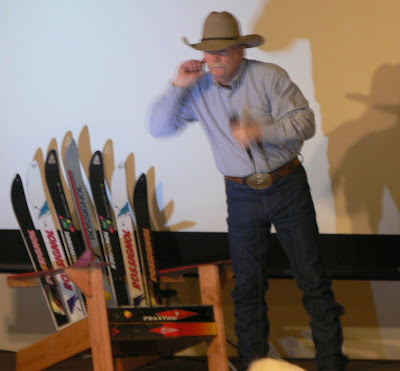 The Frostbite Film Festival auction last Friday night was full of good stuff. Snowshoes donated from Joseph Hardware, massages from masseuses, a gorgeous refurbished axe brought back to life by Bill Coates . . . that got a lot of attention during the silent auction.

Riverman and rancher Craig Nichols did the auctioning and he’s so good at this job that he got Charlie Kissinger to bid against himself, more than doubling the price of the custom ski chair made by our own Paul Arentsen.

Well, Charlie bid himself up because Charlie’s a good guy. But Craig planted the seed.

Charlie raises his hand and bids two-twentyfive. Craig asks if he was bidding five hundred bucks, since he had five fingers in the air.

Charlie thinks it over for a second and says, Yep. So five hundred it is. And that’s what a charity auction is all about, folks. Nevermind that Charlie’s already more charitable with his time and effort toward the Fergi ski hill than numbers can show. And has been for years.

So it was a smashing dinner and a bunch of good people under one roof. All in all, a fine way to spend a Friday night in the little town of Joseph, Oregon.