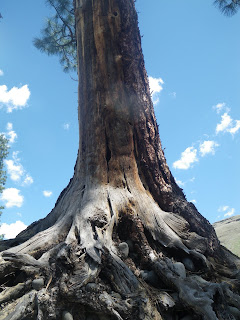 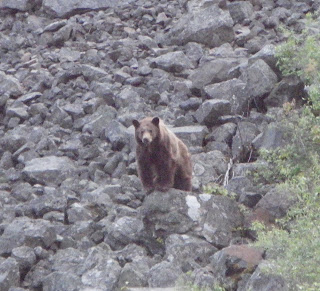 The lower stretch of the Grande Ronde is miles and miles of gentle flow, then boom, a Class IV. The Narrows. The river gets squeezed on a tight left turn and water interacts with basalt in some interesting ways.

I know one rower who got catapaulted from their boat, right behind their dog which took flight first. There’s a cross on the bank where you stand to scout the rapid, and that tends to add to your concentration.

Morgan and I were shuttling Graning Weed Control through the lower corridor, stopping to spritz noxious weeds with growth inhibitor.

And there were a couple bear sightings, which is always interesting. One of them more than usual. Details here in the Wallowa County Chieftain report I typed up.

So we take a look at the Narrows this time and the usual left-side sneak is not so sneaky. It wants to push you right into a frothing hole that’s not so inviting. Next option is to dodge some upstream rocks and run right over a shelf of rock that’s got enough water to form a miniature one-foot waterfall-like feature…but we settle on a compromise and decide to just clip the edge of this shelf and squirt down the center, dodging a somewhat menacing rock that’s cutting through the water.

As Morgan is going through fifty yards in front of me, he passes that rock and stands up to wave me further right. OK. I adjust further right. Now I’ll be going over the shelf.

He waves right some more. Right, right, right. OK, I pivot in the relatively slack water above the rapid and move right.

Now Morgan and his passenger are both directing me right and I head for the far side.

Getting closer to game time. Point of no return. I’ll be sliding over that drop in thirty seconds. Water is picking up speed.

I’d been looking ahead for the best tongue of water to slip over and came to rest on a barely submerged rock, lurking just below the surface.

And there I sat.

Well allrighty. This gave me plenty of time to study the situation and the results were that I was probably going to be running this rapid backwards once I spun the boat off the rock. Swell.

We adjusted the seating arrangement so Jake moved to the back of the boat and Chance bounced up and down while I wrestled with my left oar to spin us off.

Didn’t even have to run the Narrows backwards, which was handy. Down below, Morgan and Bill described that fin rock as much sharper and menacing up close than it looked from the bank. A potential boat ripper they figured called for as much distance as possible.

So that’s my new Narrows strategy. Park on a rock to get a look at things right above the technical stuff and you get a much better perspective that way.

We got home, had just enough time for a laundry scurry and headed back out for a Hells Canyon expedition with high school students from Hood River. River season is moving right along with a few calm moments in between trips. A lot like parking your raft on a rock to look ahead and see what’s coming.