The Grande Ronde River got downright rambunctious last month when the water spiked up. The flow went from 5,000 to over 20,000 cubic feet per second in 24 hours, and that brought some changes.

Paul, Jeff Michael, Mike Zobott and I just went down the GR from Minam to Boggan’s Oasis and passed areas where blowouts have shoved a considerable amount of earth and stone out into the channel.

This here picture may not seem all that extraordinary, because I don’t have the accompanying ‘before’ picture where all that rock didn’t used to be there. 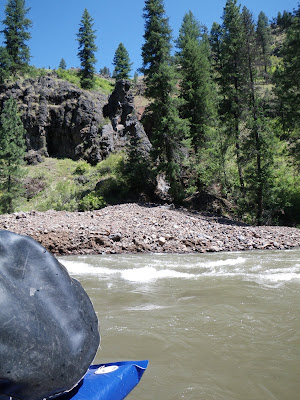 The water is starting to settle into a summer mood. We put on at Minam, directly below the confluence with the Minam River…and the Wallowa was still pretty colored up. Pretty chalky. Couldn’t see bottom, nor your oar blade.

You join the Grande Ronde downstream nine or ten miles, and the Ronde was running nice and green, much clearer. Ditto the Wenaha River where it comes in at the town of Troy.

You can read a book through Wenaha River water right now, it’s so clear…assuming the pages of your book are waterproof and there’s lead in the binding so it weighs enough to stay on the bottom, but then the current would probably turn the pages before you were ready and it wouldn’t be that comfortable to stand in the stream and look down – so maybe don’t try reading a book through Wenaha River water, but it’s really, really clear right now is what that ‘read a book through it’ scenario was supposed to get across before it got away from me there.

Observe: a crayon drawing I did of the Wenaha joining the Grande Ronde. Note the disparate shades of hue amongst the two streams. 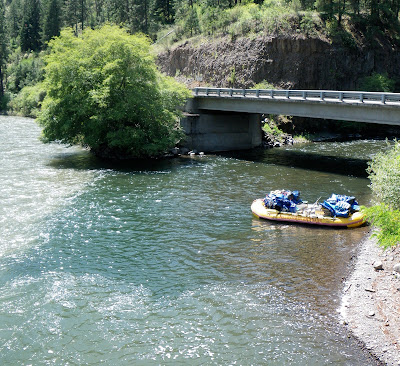 Yeah, I just used ‘disparate,’ ‘hue,’ and ‘amongst’ all in one sentence up there. I made the coffee really strong this morning.

That expedition on the Grande Ronde was with Adventure Treks, an outfit that gets yoots acquainted with the wilds. 16 teenagers make for memorable floats. Highlights included a cinnamon eating contest, which included puffs of spice getting poofed out of nostrils like a dragon. I had never seen that before.

I also witnessed half of a one-armed pushup. It ended abruptly, but Dallas was OK, dusted himself off and then tried again and managed to do three of them.

We’re headed for the lower Salmon River today. Morgan, Jeff and myself. The Salmon has been dropping steadily and calming down, so it’ll be good to get down on those sandy beaches.

I’ll give you a report when we get back Friday. Until then, do a few one-armed pushups to get in shape for your rafting adventures this summer. They look difficult, but it’s only the second half that’s really tricky. Gravity is on your side for the first part.