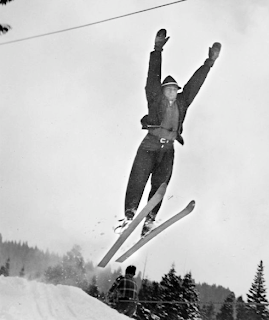 Harold Klages catching air and getting ready for the high-fives.

The Wallowas fill postcard racks with reasons to spend time out here but one thing you can’t get into a frame is the unique mix of people knocking around these mountains, living up and down this valley in an out-of-the-way place that sure doesn’t seem like it.

We all cross paths with interesting folks all the time, but often just nod and go on by. It takes a connection of some sort to appreciate who you’re talking to. River trips are a good example. You’re curious about the big rapids on the Snake River before starting a Hells Canyon trip, then you see the drop from the lip of the Green Room, rush down in there with your stomach taking a few seconds to catch up and your interaction after that with someone who knows the feeling is going to have an extra edge. You meet strangers at the boat ramp, give a polite how-do-you-do, then run the rapids together and pretty soon you’re making plans to exchange Christmas cards.

Same with living in small community. Shared experience. It’s a pleasure to cross paths with folks out here because you’ve got these routes in common. In the case of Harold Klages, he helped bring into existence the very routes many people cross paths on, up at the community ski area, Ferguson Ridge. It’s a special kind of place. More of an outdoor living room feel than formal recreation area.

We’re remembering Harold, who passed away last month. Condolences to the Klages family and thank-you to Harold, who did a lot for Wallowa County, beyond the ski area. Did a lot period. Drove Generals Eisenhower and Patton during the war. Came home and married Ardis, his wife of 56 years. Ran the family ranch. Cattleman of the Year in ’86. School board member. Search and Rescue. Snow Survey team. Flying club. Director on the boards of the Wallowa County Grain Growers and Community Bank. FSA board member. Played trumpet in a band with actor Walter Brennan. Inventor.

Made a great movie called ‘White Crossing’ about getting to the other side of the Wallowa Mountains on skis, back in pre-Gore-Tex days when everything was heavier and they did it anyways. A snow cave collapses on their crew in one scene and I’m glad to have been there during a showing of the film to hear Harold’s calm narration of a tough trip not everyone would be calm about.

Quite a guy. Here’s a look at the early days of rigging up the rope tow at Ferguson Ridge Ski Area –

Love that passage. The rat trap, the bolt-action mechanism and especially the bucket of rocks.
The excerpt comes from a history of the Eagle Cap Ski Club, written by Gardner Locke, found at skifergi.com, which is where I also found that awesome picture of Harold hitting that jump.

Fergifest happens next weekend, the end of season party at the ski hill with a mix of folks having a good time on the mountain, kids running around. It’s just fun.

Thanks, Harold, for helping to make that happen.