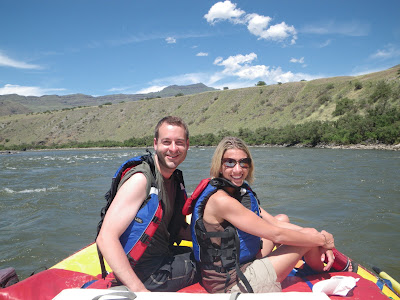 What happens when you get a bunch of veterinarians, an opthamologist, a realtor from South Africa and two Ohioans on the Snake River in Hells Canyon? Well, you have to come rafting with us to find out. But I’ll tell you one thing: it sounds exactly like the lead-in to a joke by Bill, the other guy along with us.

Up there’s the Ohio folks, Chris and Heather. Both excellent swimmers and a positive joy to have on my boat. And that’s Bill, down below this paragraph, rocking the pink hardhat, which is a tricky one to pull off. There was some waiting to get across Hells Canyon Dam while they were fetching sticks out of the reservoir . . . and this was priceless: we were sent an update from Idaho Power that the waiting period would be no longer than fifteen minutes. The folks there told us no, it would be an hour and when asked to explain the discrepancy, one of the Idaho Power workers pointed out that we were on Pacific Time, and they operate in the Mountain Time Zone. Ahhh. 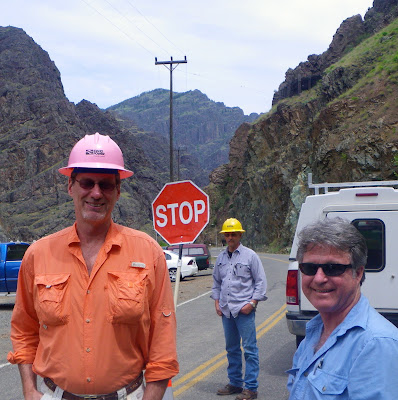 So there’s this pit bull with an abscessed tooth, and . . . forget it. I never remember jokes.

Patrick pioneered a new campsite for us. It’s kind of exciting. We’ve got our favorite haunts down there in Hells Canyon, but I’ll be jiggered if young Baird didn’t just up and explore a new frontier. Kind of a little bit exciting, I’ll say. Nice work, Patrick.
I’m not going to say where it is, because that’s super double-secret proprietary information. Sorry, other outfitters. You’ve read this far for nothing. Go about your business.

Speaking of Patrick Baird, he got older yesterday. Worse places to spend your birthday than on the river. You’re going to like the gifts your old man got for you, Patrick. If not, give them to me.

Heading out in the morning for the Grande Ronde River with a group of young adventurers from Adventure Treks. Looking forward to it.