I’m just catching fish with my hands these days

Got in a roadtrip to fish some new water over Montana-way last week.

What you see here is a specimen from the Beaverhead River, which was about the only river not running so high that fishing was out of the question. 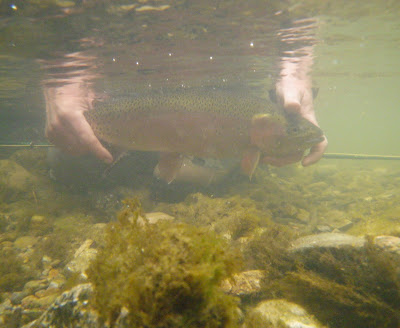 These underwater picnic tables are why the Beaverhead wasn’t running high. They were holding water above the dam to relieve flooding situations down lower, was the word around the campfire. 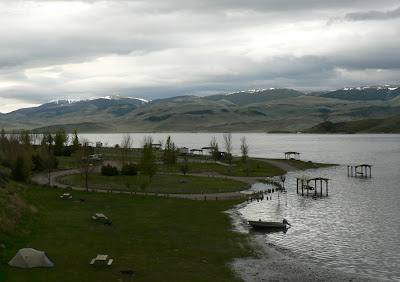 Float me the mustard please.

These Beaverhead fish do not play by the rules. They hang out in the shallows where they shouldn’t be, congregate in a pack right below where you’re standing in the stream . . . one of them flipped me off. I mean, that’s just rude.

The only flies they would take were so tiny you needed a high powered microscope to tie the things on and the fish needed spotting scopes to see the flies coming at them. It’s a cumbersome arrangement. Your line has to be so thin we ended up using spider web gossamer threads made of fluorocarbon — fluorocarbon spiders are very rare and tippet material made from their webs is on the expensive side.

So I just started catching fish with my hands. Seriously. This half-dead rainbow was hanging out next to me while I was trying to catch other fish and I recently watched a video where a guy demonstrated slowly getting your hand under a fish, then rubbing its belly which calms them down and you just pull them out of the water. 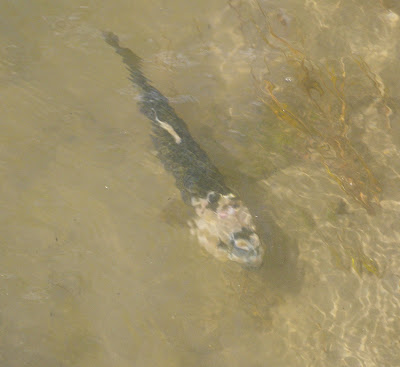 So I tried the belly rub. And it worked. Pulled that thing out of the water. Held it. Got a look at its banged up noggin and put it back in the water. Told Dave about this, he didn’t believe me so I walked over and did it again. So technically I caught that fish twice, which did wonders for my numbers of fish caught on the Beaverhead.

After I realized I was ninja, I spent the rest of the day sneaking around in the river breathing through a reed, jumping out of the water to karate kick other fishermen, used throwing stars to cut the ends off cigars of rich guys … used nunchucks to swat mosquitoes back at camp. That kind of thing. Been working on my backflips, too. They still need a little work.

Altogether an interesting trip. Frustrating at times, fishing for those sophisticated, smart trout. Just like sophisticated people, me and these fish didn’t have much in common and my attempts to engage them rarely worked. Ah well.

So we heard the Missouri River was running high, but still fishing OK.

And we heard wrong. Here’s an action photo of fishing amigo Dave scratching his head, trying to figure out why we drove up there in the first place. Later he would be scratching mosquito bites. Missouri River mosquitoes are not fun. 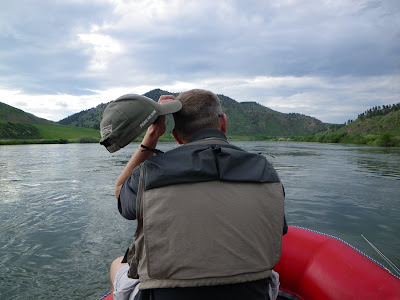 So Montucky treated us awfully well, but it’s always good to lay eyes again on the Wallowas.

Morgan just got off another Hells Canyon trip today so I’ll check in with Cap’n Mo and pass along the trip breakdown for the next post.

Here’s a shot from a recent launch. Print this out, cut and paste yourself into the picture to get the feel of what it’s like to be about to push off for five days of Hells Canyon rafting or, better yet, just come on out and get in on a real trip. 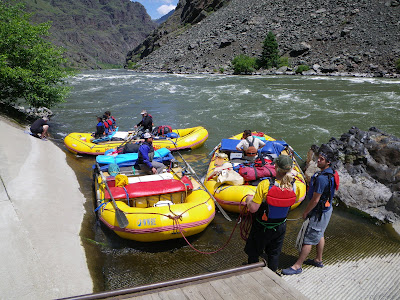 Local fishing reports have guys catching salmon on the Wallowa, Grande Ronde and Imnaha. So if you don’t want to drive for 24 hours to catch elderly fish with your hands, get out here to lovely northeast Oregon for a crack at the chinook run — or get in on the super-fun smallmouth bass fishing down on the Snake. We’ve got options.