It was 40 years in the making, but well worth the wait to get down on the Imnaha last weekend with a pile of friends to fish all day and then feel old afterwards.

Paul and I both boosted the birthday candle industry this year. He’s about 24 hours older than I am. I’ll be darned.

Here’s Paul at work on the river. 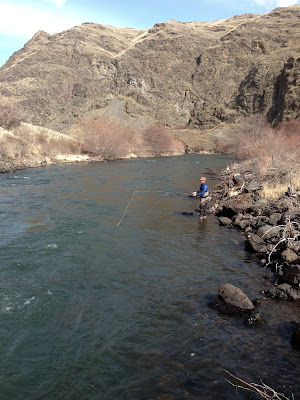 And here’s what he had to show for it. Nice wild male that very well could be the same fish he hooked in the same run the day prior. 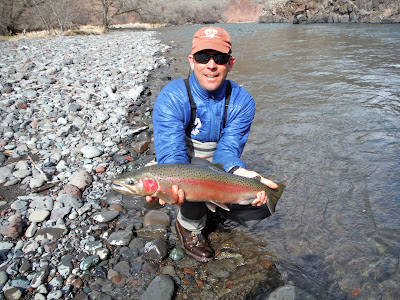 I was having a dry spell until Neal Espinoza unveiled the secrets of a particular run. Neal landed a handsome boy steelhead, then I turned this lovely lady up. Also lost one not long after that, which made me throw a tantrum. It was a quiet tantrum, mostly internal. It’s still going on actually. I’m still furious.

My brudder-in-law, Chad “Crawdaddy” Crawford, came over from Eugene with posse members Bill Rhodes and Dave Morrison. They also have nicknames but we won’t get into that now. Dave is a handy fellow and likes pancakes, though. I can reveal that much.

Chad has created not so much a camping trailer as a triumph of art and utility. Behold this glorious contraption allowing him to store and transport all of his outdoor luxury items, which fold out into the very essence of convenience. Seriously. Love that trailer and kitchen setup. 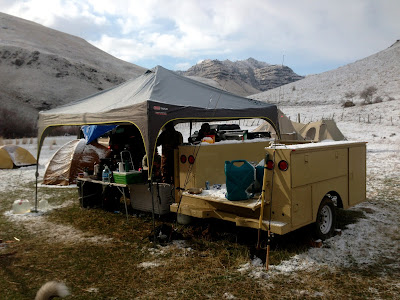 Their tent, in the background, had a boiler of a woodstove setup and I’m not sure if the snow went away because of a pressure system or Chad’s stove.

On the subject of stoves, we carted the ol’ watering trough/wood-fired hot tub down to the scene. Ain’t nothin’ like soaking in the hot tub after tromping around in waders all day. Here’s before. 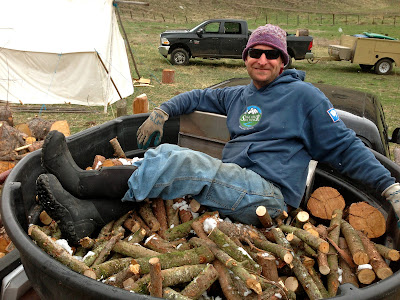 Here’s after. With some nice steelhead water right handy. We all took turns fishing that water and got nothing, until Stirling Webb showed up and, bam, in fifteen minutes caught his first steelhead. Nicely done, chap. 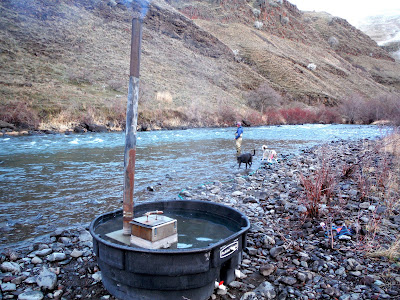 Breeze and Joanne showed up in the Scooby Doo van and solved the Mystery of the Imnaha Monster while they were down there. 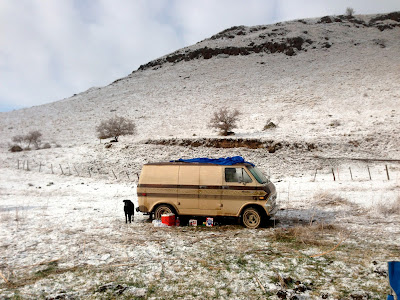 Great time with a bunch of pals. Thanks everybody for coming down. Jacey, Hannah, Mike Baird and his future son-in-law Matt . . . Dave Rooper and Kate Frenyea, Justin, Quinn, Claire, high school pal Jeremy Hill . . . Jake and Edie . . . this here is Tony Tranquilli, buddy from Portland. 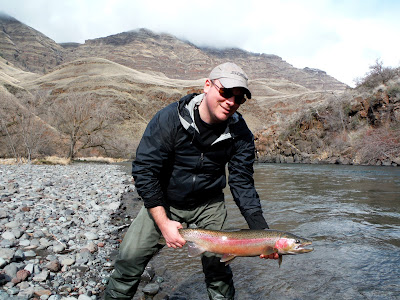 I don’t know who-all I’m forgetting, but it was a fine hoedown.

Except I’m so old I was snoozing every night pretty early after hiking, hot tubbing and being old.

Here’s one last shot of Paul, right before a running of the bull. Good times. Good times. 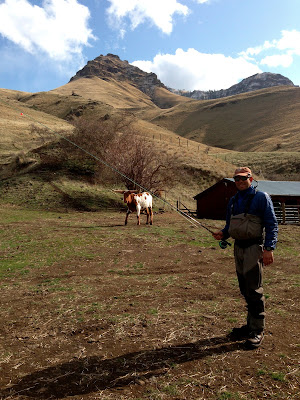