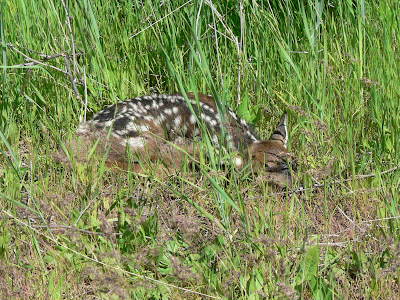 The Portland Garden Club got a closeup look at the Wild and Scenic stretch of the Grande Ronde last week during the sweet spot going on right now with flows that allow for a 38-mile day trip.

Captain Morgan Jenkins and I were driving shuttle rigs, and swung wide on the way down to Troy by taking the Rattlesnake Grade. We wanted to keep off the gravel roads to keep the work rigs clean. And hey, Boggan’s Oasis was right there so we had a cheeseburger while we were at it.

Trucking along the Grande Ronde on our way to the Mud Creek takeout, the momma deer pictured below and her little fawn wobbled through the grass just off the road.

I don’t believe I’ve seen such a youngster of the deer family ever. This little creature hadn’t been long in the world but had the good sense to take cover when Mom said over her shoulder, “We’re not losing them, take cover and I’ll distract them. Here’s some crayons. Stay under this bush and color for awhile.”

I fumbled around for my camera but wasn’t quick enough to get the lens cover off and snap a picture while mom and the tiny deer were making their way across the meadow on foot. Or hoof. Here’s a photo right after the fawn took cover and mom trotted off. You can see the little spotted feller at the very bottom of the frame. You have to look close. It’s . . . well, you can’t really see it, but it’s there. 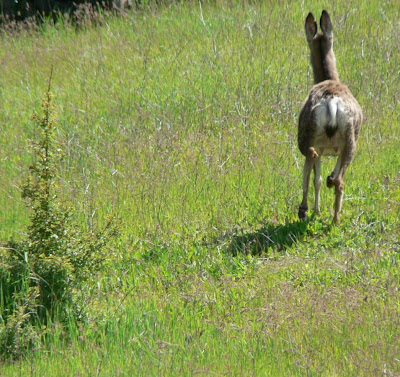 Impressive camo. If I hadn’t seen the fawn lay down, never would have spotted it in the grass. My mom used to do the same thing with me. Took me out in our lawn and made me hide under trees for a few hours. Never really explained what I was hiding from, but she sure saved on babysitters that way. 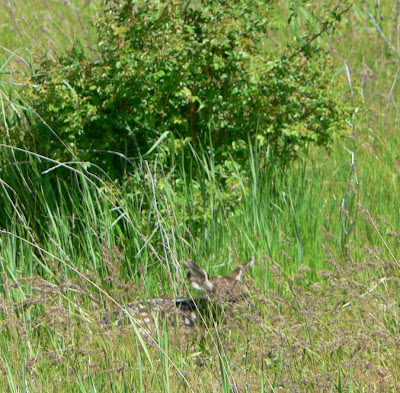 Down the road another few clicks, saw these national symbols having a snack on a rock bar. 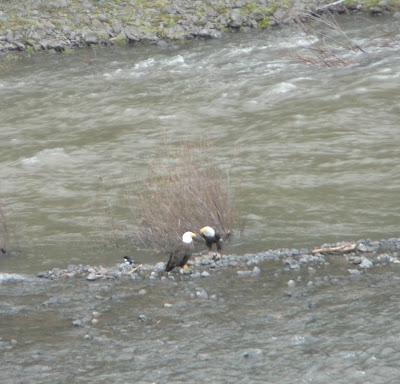 Magpies and crows were trying to sneak in, but the eagles weren’t too concerned. Not rightly sure what they were eating, fish or a Subway sandwich or whatever. They seemed to be enjoying it, though.

So even driving along the river is exciting during the spring. Moreso on the river. Paul, Tom, Craig and the Garden Club reported seeing a cinnamon bear during the float. I once saw a cinnamon and sugar bear. It was a cub. Trying to hide under a bush. But the heavenly scent gave it away. Almost like a cinnabun.