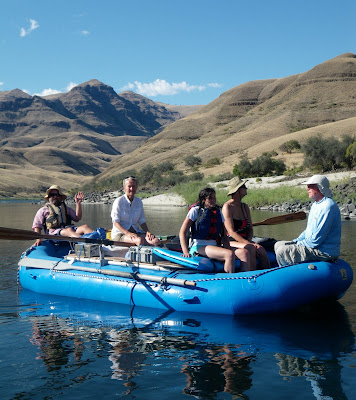 “…Mister Flounder, come and get some food…[some other fish] you come up here too and get in my boat…” I can’t remember the exact words, but that’s a rough paraphrase of a Norwegian fishing song translated into english I heard along the Salmon River on our last trip.

Uncle John Cotton was casting for smallmouth bass at the time and Lila shared this song she remembers her father singing, hoping it might improve John’s fishing results. Smallmouth bass are notoriously bad at foreign languages, however, so it didn’t do much to improve the afternoon fishing.

I enjoyed it, though. A lot. Not just the fishing song, the entire trip. Leif Christoffersen has been bringing together family and friends for river trips out here for, what, six, seven years now. Leif’s son Nils lives here in Wallowa County and works as the director of Wallowa Resources. Lucky for us that Nils and his family get a visit each year, because the Winding Waters crew also looks forward to the Norwegian delegation coming out to see us.

We make new friends each trip, and it’s double-good to see you when you come back, so if it doubles each time and that happens six or seven times, then….let’s see, I’m terrible at math, but that means it’s like fourteen-times as good to see old rafting friends – or, no, one-hundred and…well, let’s just say it’s nice to see familiar faces and catch up on what everyone’s been up to since you last saw them.

Here’s Caitlyn’s boat, running China Bar Rapids. All our inflatable kayak paddlers made it through China in excellent form. The bottom waves in Snow Hole tipped two kayakers, but they got right back in, no sweat. Lots of good boating on this excursion. Note Ann rowing the big boat up above. Leif did his time on the oars and in my raft I had Tom Kearns take over for a time, then Uncle John rowed us through some tricky water down around Flynn Creek as we approached Blue Canyon. 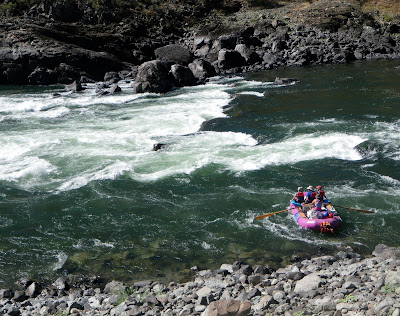 We had lovely weather for early September. Caught a lot of fish – probably because Craig Nichols introduced the kissing of fish before they were released again, and the word must have spread underwater because those smallmouth just kept coming back for more. Here’s an action photo of John Cotton whispering sweet somethings in the ear of a smallmouth. Assuming bass have ears. I’m not sure about that. Looks like Terry in the front of the boat can hear, too. He caught so many fish he’s probably looking for ideas on what else he can say to them before releasing them back to the deep. 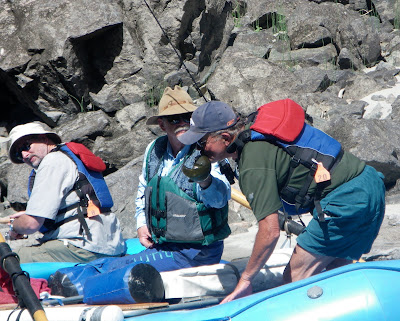 Tom Kearns got in his painting time by riding along on the gearboats with Jeff and Patrick. I like how he distills what he sees. I surely do. Always nice to have an artist along. 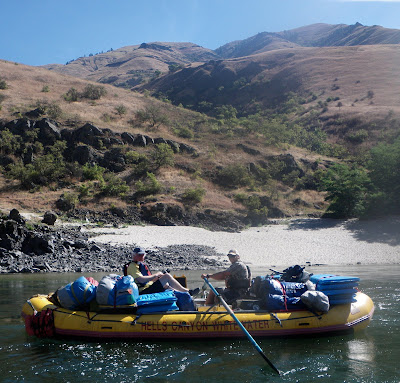 And a musician. Craig’s campfire concerts were sold out and he was in fine form. Especially nice to listen to a guy tell stories and belt out tunes after a dinner featuring the grass-fed beef he raised on his ranch.

Jan Homan was also on board, she’s our naturalist and has a fine way of making you appreciate your surroundings while on hikes or just floating along, wondering what this or that is you see growing on the banks or flying by, catching bugs above the river.

Thoroughly enjoyed that trip and looking forward to the next go-round.