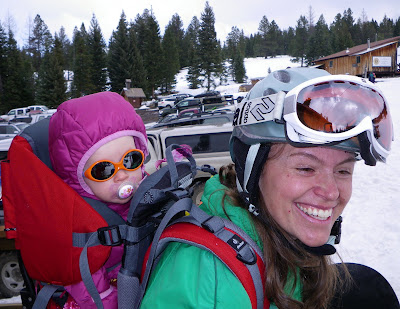 Paul’s cheering section. How could he not win?

Paul Arentsen once again brought home the gold for Team Winding Waters at the annual Fergifest lawnchair race. Paul got moving so fast that a speed wobble down at the finish line made his helmet-cam pop off.

…then Jerry Hustafa came along and lawnchaired the camera down under the snow. But not to worry. Paul went back with a metal detector the next day and reclaimed the helmet cam. We’ll post the footage once it’s restored in the Winding Waters Extreme Sports Video Editing Lab.

It should be good. Paul strapped the camera on backwards this year to capture images of the rest of the pack. Last time he won this race, his video lens was pointing forward, so all you could see was the atmosphere bending as he approached Mach IV in his ultrafast sled.

Meantime, here’s video taken midway on the course. Starts out slow while the racers stall and wonder why we’re about to do this, but look for Paul zipping by about the 45-second mark. A few seconds before that you can see a pileup in the background which is me getting run over by a kayak. Good times. Good times.

My own lawnchair contraption could have used a test run before race day. Except I put it together the day before so there really wasn’t time. I had plenty of time to think about it though, while walking the sled both up and down the hill, since it didn’t want to work going either way. Ah, well. I needed the exercise. 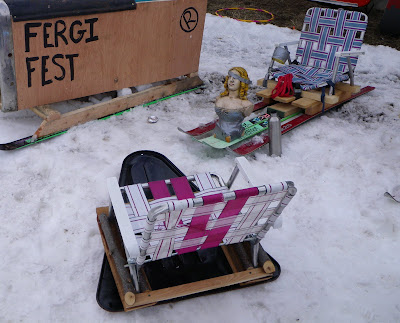 Paul’s victory chair is in the background. My defeat stool is in front. For once.

Fergifest is the end of season party at Ferguson Ridge Ski Area in Joseph – a wonderful reason to visit Wallowa County when snow is on the ground. Next time you’re heading out here for a steelheading trip, pack the skis or snowboard, bring the family and make your vacation a two-pronged attack. 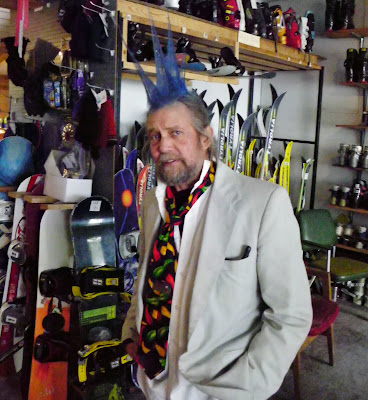 The Godfather of Ferguson Ridge: Charlie Kissinger.
His mohawk and tie might clash, but he can sure enough coordinate a ski area.

You might concentrate your planning for that Wallowa County steelheading trip on the fall run this year, since Ma Nature turned up the thermometer recently and the rivers went on the rise. I got in one last great day on the Imnaha River before the water went from green to brown. By that I mean I watched Dave Kesey have a great day, landing five steelhead in about three hours while I continued my streak of hooking fish but not landing them. I need to quit using flies that look like sunflower seeds because the steelhead just keep spitting them out.

Bluebirds and buttercups are showing up throughout the Wallowas and starlings are circling my yard looking for nesting sites, so spring is here and rafting season will soon be upon us.

We only race lawnchairs one weekend per year out here. Rest of the time we use them to sit by the river after a day of floating to soak up the good life. 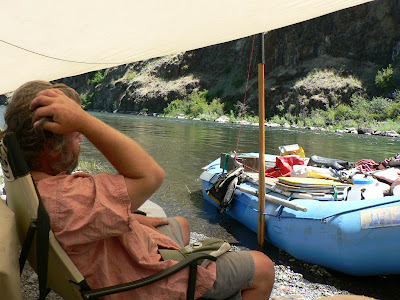 Reserve your lawnchair today. Available in your choice of riverbank: along the Snake River in Hells Canyon; the white sands of the lower Salmon; or among the forests of the Grande Ronde. All fine choices.