Rivers thaw out and steelheading picks up

The Grande Ronde, Wallowa and Imnaha all had ice on them as recent as last week but I personally took a hairdryer and a few hundred furlongs of extension cord and fixed that, so you’re welcome.

The Wallowa River is a short walk from my house in Enterprise, but it’s more creek-sized this high up. After the ice retreated I saw this grim collection of young fish under the bridge. 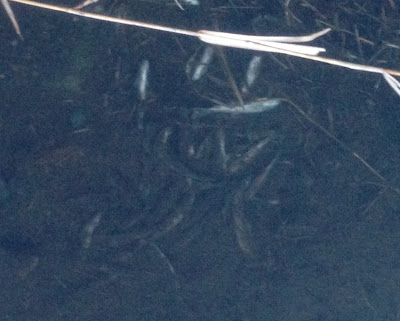 I’d been wondering how the fish fare under an iced-over river, and this suggests that, at least for young ones in shallow water, it can be bad news. This section is pretty much a straight, fast channel with not much in the way of holding spots out of the current.

Caught this steelhead on Superbowl Sunday on the Wallowa. Had a dropper rig with a tungsten head prince down low and a pink beadhead on top. This fish took the pink top fly. Also caught a beauuuuutiful chubby 18″ rainbow that went for the prince. No picture of that one because I was in the middle of the river and using my phone for photos, so I could see that going badly. 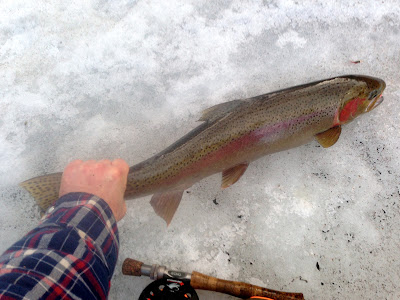 Mike Baird was fishing a similar rig with something bright up top and prince below. He picked up some nice trout and whitefish Sunday – but the day before he connected with two steelhead on the Imnaha and that was really the report that got me back into waders after the freeze.

So the Wallowa is fishing. There’s snow and ice along the banks, but not too bad. Here’s a look down the canyon – 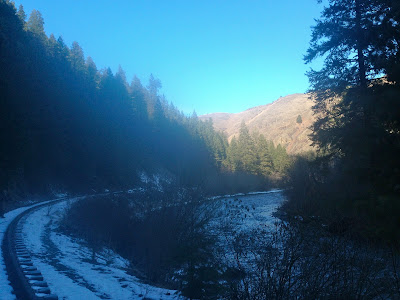 Probably saw 6 other rigs with fishermen . . . not terribly crowded.

Except. Let’s talk river etiquette here. Baird and I headed for a particular run but two other guys spin fishing were already there. Did we start fishing next to them? Of course not.

Mike and I went down to a different run. The same two dudes show up fifteen minutes later and start fishing the top of the run. What the hey?

I can see how a gear fisherman focuses on a deep pool and doesn’t stray too far from one casting position or in some cases the comfort of a warming fire consisting of smoldering bait containers, plastic and Keystone Light cans.

But the fly fishing game is to cover water and move. Come on. Let’s have some understanding of tactics here across the gear and fly divide.

If the argument is that a fisherman may be headed for water but hasn’t gotten there yet, so it’s open, I give you this scenario:

You find an open parking space and position yourself to parallel park. Another car comes along and noses in rather than backing in, because, hey, it was open.

Driver A gets upset, Driver B doesn’t care. And that’s why we can’t all get along.

It comes down to Do unto others as you would have done to you.

So when I saw those guys an hour later at a different hole I stopped and fished right next to them because apparently that’s how they like to do things and I try to be accommodating.

So anyway, here’s what I know from various reports:

The Grande Ronde was muddy after rising a thousand cfs with the thaw, but I heard of gear guys doing well down around Troy before the jump in flow. Once the GR settles down it should be a good bet.

The Imnaha isn’t red hot, but it ain’t bad either.

Get out there and get a line wet. It’s go time.

For guided steelhead fishing trips with Winding Waters, click on this.

Unless you’re those two guys the other day, or my buddy Mike Baird.

I caught that steelhead across the river from where Mike was and I saw fire come out of his eyes when I was going on and on for the rest of the day about how lucky I was.

The protocol for that situation is tricky. Mike had been fishing that run and caught some trout. I waded across from below and came up to see how things were going. Started fishing my side of the river.

As I see it, there’s no way a fisherman on the opposite bank could have made a cast to drift through where I picked up the fish.

But if the roles were reversed I would be sure that fish would have shifted position and come into my casting lane, so I would be seething with rage.

Lucky for me Mike is a gentleman