Positively splendid news from the land of steelheading, old sport. Sir Thomas Farnum, Winding Waters Director of Putting Fish on the Ends of FlyRods, has returned from a day along the banks of the merry Grande Ronde with encouraging tales of activity amonst the river rock and stream.

Tom’s fishers, pictured below, each landed steelhead on the smaller-ish side, as you can see. But Tom says the dad here hooked into a charger of a fish that just marched around that river, taking line off the reel like it belonged to him, like he had a receipt for that 7-weight tapered line and by god was going to get it back.

Which, as it happened, he did not. The hook eventually pulled out before the fish could be landed and our man here had to console himself with having had a feisty tussle with what Tom figures must have been a wild fish. And a spunky one at that. 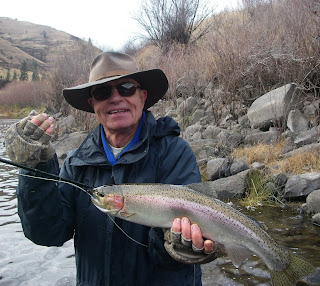 Here’s his son with a fish he picked up right below [I’m not supposed to tell]. 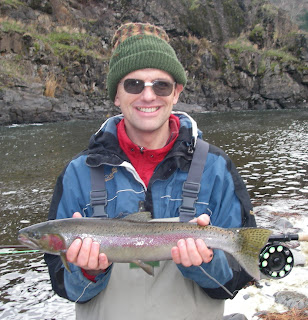 These fish were caught using [not supposed to tell that either]. And Tom says you will definitely, for-sure, catch steelhead if you simply [I don’t feel right, passing on these secrets. You’ve got to talk to Tom].

Also, the guaranteed, sure-fire fly to use on the Grande Ronde River if you’re at all interested in catching trophy steelhead is [well, it has feathers. I can reveal that much. Beyond that, I refer you to Tom].

So talk to Tom. You can do so by visiting the digital fortress of the Winding Waters kingdom for info on Grande Ronde River guided steelhead fishing. Tell them the Gearboat Chronicles sent you. Also, tell them I need my pyrex dish back. The one from Thanksgiving that had the casserole in it with the baked funyuns on top. And tell them —  you know what, I’ll just click on the link and tell them myself. Thanks, though.

Speaking of Thanksgiving dishes, boy am I embarrassed. If you made Morgan Jenkins’ Ultra-Famous Three Alarm Cranberry Chutney like I told you to for the holiday, well, I forgot to mention the diced red onion. Damnit.

I remembered when I was making it myself. It looks like this: 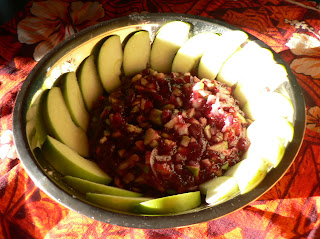 And tastes like a gang of cranberries got into a fight with a jar of horseradish and some walnuts and red onion and diced apple tried to break it up but they all just ended up involved in the melee so a bunch of green apple slices gathered around to watch the excitement. That’s what it tastes like.