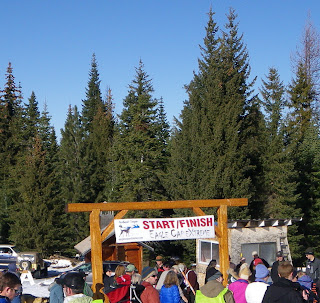 Spiffy starting line from Jay-Zee Lumber.
It’s good times, having mushers in town. Nice to see dog sleds on top of trucks driving down the road. You think, oh, here comes a – no, that’s not a . . . it’s, uh . . . that right there is a – what is that? Oh, yes, of course. 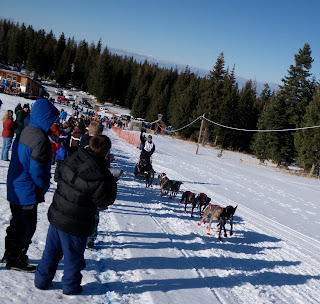 Lots of folks volunteer to help put these races on. Jerry Hustafa is so dedicated he strapped himself in the traces and helped pull a sled for 10 miles when one of the dogs needed a break. 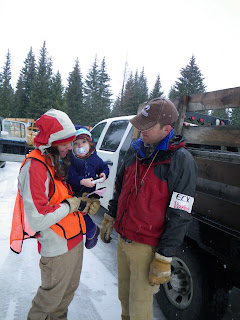 Binky patrol.
Paul, Penny, Morgan and Todd have been helping shuttle sled dog fans up to the starting line over the years, running a hay wagon type trailer setup behind the Winding Waters trucks. I got to help out this year and had a fine time visiting with folks on the short rides. Lots of river folk come out to watch sled dogs, I notice. 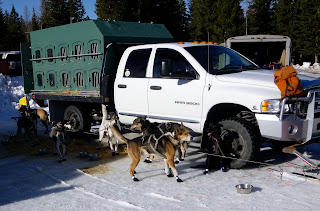 Speaking of things to do with snow, this is your final boarding call reminder for flight Frostbite Fundraiser, leaving from the terminal this Thursday eve, 6 pm from the OK Theatre in downtown Enterprise.
Cool movies courtesy of The Backcountry Film Festival. Door prizes, raffle and live auction, including a one-day rafting trip for four people with some rafting company . . . let’s see here . . . Windingo Waters? They look fun. Heck of a nice website.
Also two nights at Wing Ridge for four people, a one-of-a-kind Paul Arentsen ski-o-lounger chair and a brand spanking new pair of Black Diamond skis. Quality stuff and the proceeds support the Eagle Cap Ski & Nordic Clubs, Wallowa Valley Community Ice Rink and the Wallowa Avalanche Center. 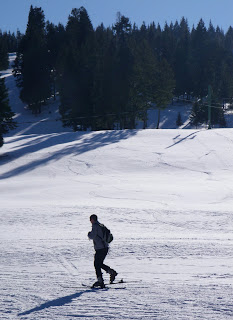 Lou going out for a spin while everyone’s distracted by dogs.
Be there. More info at SkiFergi.com and Penny has a Facebook page going.
Well, amigos, Paul and Tom Farnam and I are off to investigate reports that Spring steelhead fishing is already a going concern on the Wallowa River. Learned that bit of information from Eric at the sled dog races.
And Mike Baird said he got in some fishing Sunday afternoon, reported the water clarity is just fine. He picked up a nice bull trout, no steelhead, but they’re in there.