2010 will go down as a record year for steelhead fishing in Oregon. Jon Rombach caught not one, but several of the swimming creatures. Simply astounding.

I wasn’t the only one. Paul caught fish aplenty. Penny got in on it. Morgan hooked up. Team Winding Waters did well all around. Tom Farnum, our fishing guide, came into contact with so many steelhead this year, his jaw started to hook toward the end of the season.
But we’ve laid the rods to rest. Packed away the ten-pound leader until next year. Love is in the air, and water, and these fish don’t need to be pestered any longer with lures and nymphs and wads of baited roe. There are redds to be dug and spawning to be spawned, so that we might have epic fish runs again in the future. I’ve been taking a stereo down to the riverside and playing Marvin Gaye ever so lightly at dusk to help things along.
I learned many things about fishing tactics this season during outings with Tom and Paul. By far the most important lesson I gleaned is what to do with the fish once you’ve caught it.
Many people just hold the fish up for a picture.
Wrong.
It’s all about perspective. If you hold the head of the fish canted toward the camera, the angle makes it appear as though you hold a monster in your hands, and it’s coming right for you.
So take note. Next trophy fish picture you get ready to pose for, point that thing at the lens. I’ve posted here two examples to illustrate the point.
These fish were caught on Paul and I’s last day of fishing on the Wallowa. Note how Paul’s fish appears to be larger. Mm-hmm. Trickery. 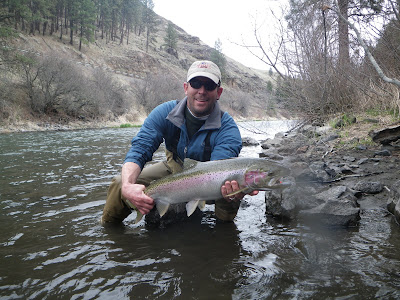 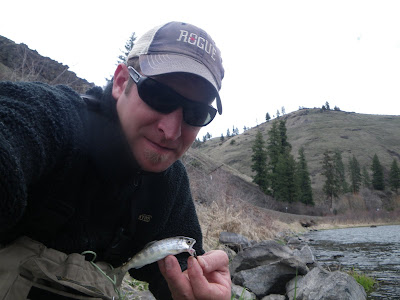 Savvy observers will note that my fish is actually a Chinook salmon. And we all know these are large sportfish, much more coveted than steelhead. Paul cried and cried on the way home because he didn’t get to catch a salmon.
We’ll see you on the Wallowa River, or the Grande Ronde, for the next run of blockbuster steelhead fishing in Wallowa County.
Until then, think trout. Especially the stonefly hatch on the Grande Ronde in June. Call Paul or Tom for details.
There’s also smallmouth bass. And Snake River sturgeon. Not to mention Wallowa Lake kokanee, which have set the state record twice so far this year.
Fish on.