I couldn’t find a pie chart so this boring graph will have to do. Lay your eyes on what the Grande Ronde river has been up to: 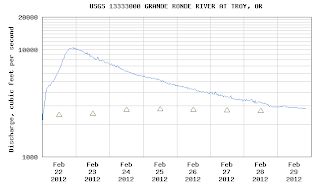 Notice how it went way up – which any fisheries biologist worth their patched waders will tell you triggers a release of the swimming pheromone in adipose glands among contiguous anadromous species, causing them to mosey . . . then the river level went on a slow downward glide . . . creating a perfect storm of me wanting to go fishing.

To interpret this data, place a piece of paper on your computer screen and trace that spiky graph with the descending water level. Now, turn that paper over so it now goes the other way and represents your chances of catching steelhead. Notice how it rises. Science is fascinating.

I was over on the west side of Oregon last weekend visiting my clan members, but had the forethought to pack my fishing stuff and drove like a banshee to cross the Wallowa County line and cast the waters for a couple hours. It’s a nice incentive to take your mind off the driving.

And what do I see along the highway but the Winding Waters Jeep Cherokee fishing mobile, Tom Farnam down on the bank going after it. Here he is with a bull trout he caught while looking over his shoulder saying, “hey Jon.” 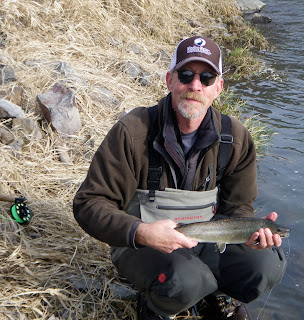 Notice them spiffy new Redington waders. They’re welded with supersonic beams or magic or something so there’s no holes poked by a sewing machine. Which makes sense for waterproof things, you have to admit. I don’t understand how they go about it, but do tip my thinking cap to whoever came up with that Buck Rogers futuristic process.

Tom said the bite had been on like Donkey Kong and he landed all manner of swimming things, though what might have been a steelhead did not make it to the bank. This was Tuesday, Feb. 28 and for more info, check out the Winding Waters Fishing Report.

For guided fishing outings with Sir Thomas Farnam, direct your inquiries to the Winding Waters Command Center after perusing the fishing page. For someone to drink a beer with and talk about your day of fishing, contact me.

I was over in Eugene playing with my nieces so they don’t forget who Uncle Jon is and went by the University of Oregon library to look in on their Alvin Josephy special collection.

Alvin was . . . how can I put this in academic terms . . . kind of a badass. I stumbled on Alvin’s work while studying history in college. Lots of history books are boooooooring, which may come as a shock. Just trust me. But I was jazzed about Alvin’s stuff and that got me reading up on the Nez Perce story and that got me wanting to visit the Wallowas which found me rafting for Winding Waters and, ultimately, writing these Gearboat Chronicles. Whoah. It’s like a Kevin Bacon chain of connections. Also, Kevin Bacon was my first grade teacher and taught me to read, which allowed me to read Alvin Josephy’s books, so the circle is complete.

Josephy’s book The Nez Perce Indians and the Opening of the Northwest is considered a go-to book for understanding the Nez Perce, Wallowa Valley history and the War of 1877. A boatload of books have been written about Chief Joseph and the Nez Perce and some are easier to read than others because they don’t bog you down with things that are true. Alvin’s work is not of that school. I’m not saying it’s a difficult read . . . it’s not. But it’s got some weight to it. There are 644 pages in my copy, not counting notes and such. Not something you’d zip through at the beach on a long weekend. That said, it’s really rather compact, considering how much Alvin managed to cover. Read it if you’ve got a hankering to understand the area. 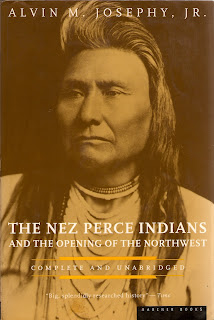 Another worthwhile read is Alvin’s memoir, A Walk Toward Oregon. The guy did not sit around playing video games, I’ll tell you that. 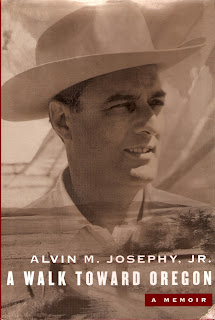 Here’s one of my favorite Alvin Josephy encounters: I used to work at the local radio station and Alvin and his wife Betty would come out in the summers to their home outside of Joseph. Eventually I wrangled an interview with the man and I was jittery. Josephy had an impressive radio career before an even more impressive writing career and it was intimidating. Until we finished the recorded interview and started shooting the breeze. He seemed pleased to talk about radio work and it was great to be kicking stories around with someone whose stories you’ve admired.

Cut to the next summer. I introduced myself when I saw him and reminded him I worked at the radio and then the next summer that would be repeated until one time he said, “You remind me every time who you are, but I remember. You work at the radio.” So I was simultaneously pleased and embarrassed.

Sadly, Alvin and Betty are no longer with us. But we do have the Alvin M. and Betty Josephy Library of Western History and Culture at Fishtrap, run by friend of the Josephys Rich Wandschneider.

Wandschneider, founder of local writing outfit Fishtrap, has a lively site with highlights from the archives that anyone interested in Wallowa County or Western history should bookmark and keep up on. Check it out.

OK, folks, you’ve got your reading assignments and fishing updates so we’ll see you on the river.