The Art of Boat Strapping

Here’s Todd and Spencer after a 5-day steelhead trip down the Grande Ronde. These guys and Morgan were taking care of camp and river cuisine for some return fishermen we were pleased to see again. 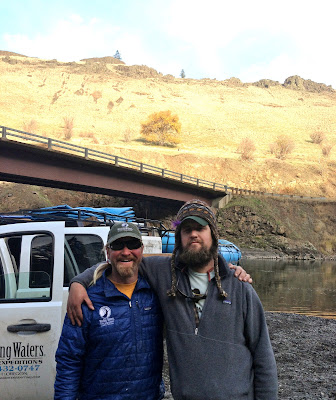 Spencer latched into a nice fish in the run above Sickfoot a secret spot after the boys got camp all packed up that morning. One of the guys landed three steelhead from one run and we took off before everyone got to the takeout, but word is they were into the steelhead above Wildcat Bridge.

This Todd Kruger fellow, on the left up there,  has taken gearboating to a new level. Lashing down gear on a raft usually means running some straps and cinching them down. Todd’s approach to strapping is reminiscent of the Japanese art of flower arrangement, Ikebana, paying close attention to graceful, elegant form with an emphasis on precise placement.

Here’s a picture of a 12-foot raft Todd prepared for a trip down the Grande Ronde earlier this year. I stopped in my tracks when I saw this piece of art on display in the boathouse. I put my hand on my chin and just drank it in. Then walked around the whole boat nodding, saying ‘yes, yes, I see what he did there. . . magnificent!’

Look at that. The straps appear to have been arranged with a laser level. I imagine he was wearing white butler gloves at the time and playing classical music in the background. Honestly, his strap work is impressive.

I’m more of the spiderweb-made-by-a-spider-in-a-hurry kind of strapper.

Todd is so well organized, I’ve considered hiring him to impose some order on my shop at home. My program is to just drop tools when I’m done with them and then look around next time I need them. I noticed some people even draw outlines above their workbench so they know exactly where to hang a tool when they’re done with it.

I compromised by drawing outlines on the floor where I last dropped the tools. 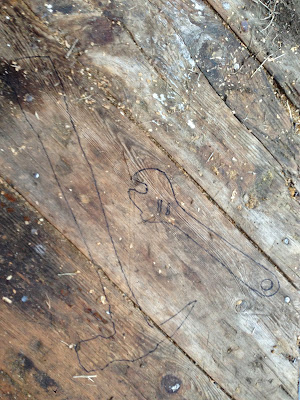 As you can see, getting the tools back in their proper place still doesn’t happen. Also, it took me forever to find that Sharpie marker.

Here’s a nice photo of Morgan and Paul, not Arentsen, another Paul, one of the fishermen on this last supported steelhead trip. We were having what you might call inclimate weather up top in the valley, but these guys got the favorable canyon treatment and reported nice fishing conditions. 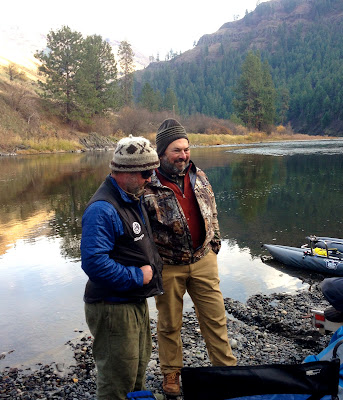 Special Report: How To Drive Over Your Expensive Glasses and Break Them

First, buy some expensive shades. The kind with glass lenses, not that polycarbonate or whatever. Spare no expense. The glass lenses cost more, but they’re worth it. After all, these are your eyeballs we’re shielding from the sun.

Next you should wear them as eye protection while you’re running a chainsaw out in the woods. Now put on earplugs, the kind that get tangled up in the Croakies holding your expensive sunglasses.

Get pissed off and yank on the earplugs with one hand while holding a running chainsaw in the other. Realize this is not all that safe.

Give a big, exasperated tug, which makes your sunglasses fall off. Throw them off to side, realizing that’s dumb and you should shut the chainsaw off and take care of your expensive sunglasses before you break them somehow, instead of leaving them lying on the ground like that.

Finally, back your truck up and drive over the expensive sunglasses. It should look something like this –

As you turn off your truck and set the brake, realize that you probably just drove over your shades.

Get out, confirm that, yes, yes you did.

Weep bitterly, clutching the broken frames in your hand, yelling to the sky, ‘Why? Whyyyyyy?’

Then realize: Oh yeah, you just threw your shades down on the ground and drove over them. That’s why, dummy.