Fishing wasn’t exactly red hot on the Wallowa or Grande Ronde for the steelhead float we just did, but Paul, his brother John and Jeff Yanke did see a live version of Wild Kingdom when they floated up on a young elk that had just taken a swim across the river. They looked on the opposite bank and saw three wolves laying down, watching the elk. Two black and one gray. The wolves considered a big blue raft floating by a good enough reason to get up and head for the trees.

No collars or tags were visible. The wolves were on the left riverbank as you face downstream, above Grossman Creek on the Grande Ronde in the Wild and Scenic section.

It happened too fast to get a camera out, so no pictures.

The rest of us came along and wondered what the deal was with the spooked and dripping wet elk trying to climb up the banks that were too steep to negotiate.

Later we saw two small herds of elk up high, same side the wolves were on.

Aside from the wolves we saw more bald eagles than a Colbert Report intro, mountain goats, bighorn sheep, river otter, elk, deer, gaggles of geese, heard the loudest frogs in the universe having a shouting match next to our campsite . . . the only animals we didn’t see were bear, cougar, Bigfoot or chupacabras.

Here’s a Bigfoot-quality photo of the goats: 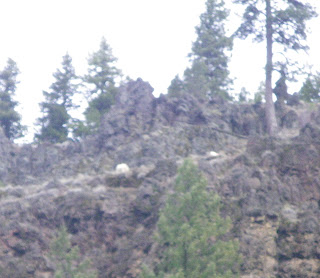 Majestic blurry white dots.
We didn’t see too many steelhead, sad to say. River was on the cloudy side but Mike Baird had it figured out, landed a steelhead and had good luck with nice, big, feisty trout. 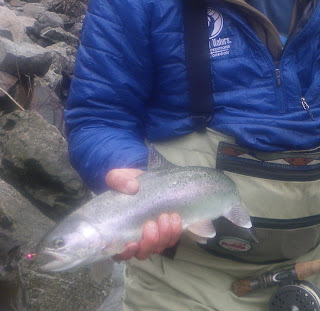 There were a few other hookups with steelhead that didn’t get to the bank. Nice trout from 16 up to 20 inches. And we exercised the whitefish population pretty well. Here’s Baird packing his hatchery hen back to camp – 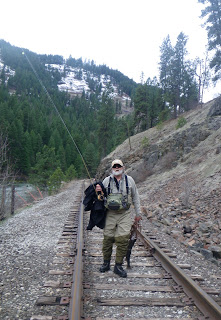 Had one beautiful afternoon of t-shirt weather, followed by a night with rain that was helpful for drawing my attention to a hole in the fly on my tent. Luckily my face was directly below the leak or I might have just slept on through, rather than waking up with the benefit of being able to really pinpoint the problem. 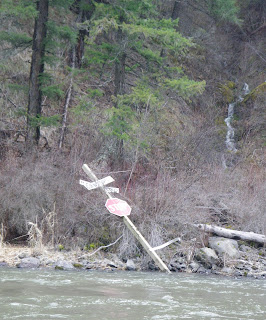 Hard to stop a raft midstream, but rules are rules so we backstroked and looked both ways to make sure the coast was clear. Might have been an elk swimming across. Never know. 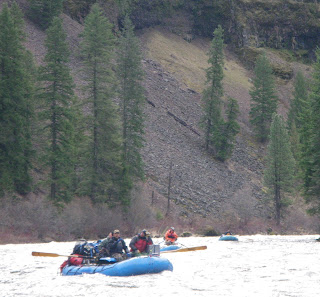 Great to get on the water and while the river is on the high side right now, there’s still time for things to settle down for the rest of steelhead season and we’ll be watching to see what the weather does to the river conditions.

Check your calendar and pick a slot to get out there on the water.

Give us a jingle at Winding Waters River Expeditions and let us know if you’ve got a whitewater trip on the Snake River in Hells Canyon in mind, a float trip on the Lower Salmon River, or a tour through our backyard rivers on the Wallowa and Grande Ronde. Who knows, you might even see a wolf. Or three.