Tom and I went for steelhead on the Wallowa River Saturday, March 3rd, with Bill, Woody and Wes. As we finished putting on waders Tom noticed a camera on the picnic table.

Woody says he picked it up out of the grass and figured it was ours. No.

So we leave it sitting on the table in case the owner notices it missing and retraces their steps. We go fishing.

This is also weird: Despite favorable conditions the fishing was not what you would describe as white-hot. In fact, you could hold your hand to the fishing and not be burned. It’s like the old saying goes: “Saturday, March 3rd 2012 looked like it would be a great day to catch steelhead, but the fish weren’t playing along for reasons unknown.” My uncle used to say that all the time.

Nevertheless, these guys took to nymphing right away and fished very well – here’s Wes with what I believe was his first fish on a fly rod. A mountain caucasianfish. 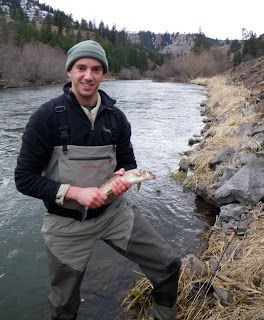 So. We fish the day out and are heading back to Joseph. As we pass the picnic table the camera is still there. We pick it up so we can run lost and found announcements, reunite camera and owner and watch our karma balance shoot through the roof.

Here’s where it gets odd. Back at Tom’s place he turns the camera on to see if he might recognize anyone in the pictures so we can figure out the owner.

And he recognizes someone right away. Here’s the picture: 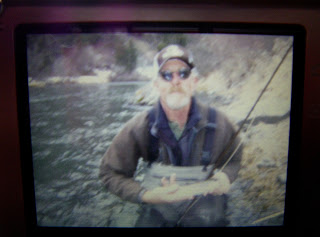 The important thing to know about this picture is that it’s a picture of Tom, the same guy holding the mystery camera hoping to recognize someone in the pictures. It took us a while to mop up the spattered brains because our minds were blown by this coincidence and then we tried to piece it together.

First mystery: why would someone take a photo of such a small fish? The clarity isn’t great because what you see above is a picture of the display screen, but you can tell it’s a wee trout. Not something to necessarily document. But then I once took the following self-portrait, so, you know – 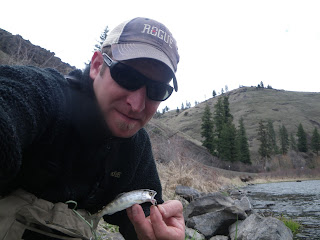 As far as The Case of the Missing Camera With a Picture Of Tom On It: we called the other guy Tom was fishing with on February 8th, the date that photo was taken, but he’s not missing his camera.
So it could belong to Paul and Winding Waters, which would mean it sat in the weeds for nearly a whole month, which wouldn’t be against quite all the odds, but most of them . . . to have it found by Winding Waters.

Also, our goodwill of returning it to ourselves would probably cancel out.

But it’s still a mystery because Paul’s still on his way back from his trip to Norway and I can’t get ahold of him to settle this. Also, there’s pictures of a dude on there that is not Paul.

So Paul is either a shapeshifter, or . . . I don’t know. If you lost a camera Saturday give us a call, explain how the hell Tom got on your camera and we’ll give you your camera back.

Also give us a call if you want to go after Wallowa River steelhead with a fishing guide who is so familiar with the river he shows up unexplained in photos with fish on stray cameras lying in the weeds.

Check out rates and dates for fly fishing the Wallowa and also know that I just heard positive reports from the Grande Ronde, where Winding Waters guides John Feeser and Mike Baird did a driftboat float and reported good catch rates.

Those fish are headed up into the roadless section and Winding Waters can take you there. Check out the supported steelhead option, where you fish all the livelong day and we set up camp and pour your martinis.

Buckets have lists that include doing this trip before they kick themselves.

All righty, musketeers. Go about your business, we’ll see you on the river and if you can explain this camera mystery to me, the lines are open and operators are standing by.