Flows are steady after a spike last week. Paul and Tom had success guiding on the Grande Ronde earlier this week. Water temperatures are up there in the high-40s, so go fishing.

1st Lt. James Nash, a Wallowa Countian currently in Afghanistan as a tank commander for the Marines, is also a fisherman. A good one. He guided over in Montana while in college at Dillon and certainly knows his way around Wallowa County rivers.

I got a fishing update from Nash the other day. He pointed out recent conditions, made some recommendations for fly selection and how to fish them.

I should maybe point out again that he’s in Afghanistan. Fighting a war.

Tank commander duties and all, Nash is more up on the local steelheading scene back home in northeast Oregon than some local fishermen I know who could start driving, be in their waders and have a line in the water within a couple hours.

James did some trips with Winding Waters between college and being stationed overseas and we’re looking forward to him being back on the river.

Although he doesn’t even need a river for practicing catch and release. Here he is with a shark he caught. Yeah, he catches sharks too. 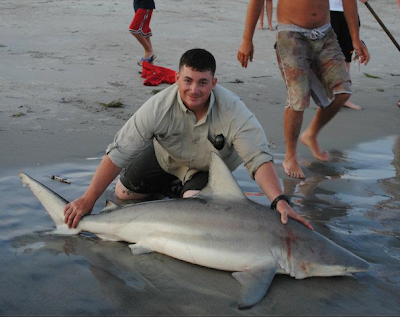 Just grow a Hemingway beard and get it over with, James. It’s going to happen eventually. Because he’s also a heckuva writer. Studied writing in college and I’ve read some of his stuff. You’ll be hearing more from James Nash.

Meantime, I’m going to take his advice and go steelhead fishing. See you on the river.