What the What? True River Stories

I put some photos up a couple weeks ago that showed one hawk giving another hawk a back massage. Or something. I would re-post one of the pictures here to refresh your memory, except I got threatened with legal action – from my Mom – for contributing to the racy nature of the internet.

I noticed a response to that post from our friend Leigh, who wondered this –

Four question marks. If it had been three, I would have skipped right by this. But clearly she wants answers.

The Gearboat Chronicles, on the other hand, is in the business of advertising a little something we like to call: ‘Amazing.’ The French call it, amazeeeng.

Stuff you just wouldn’t see if you hadn’t got out in the hinterlands and been there, just at the right time, to lay your eyes on an event you’d only see when messing around in boats.

Exhibit A: Paul, his bro and Jeff Yanke recently see three wolves on the bank of the Grande Ronde River. Ho hum . . . no big whoop, just chillin’ with THREE WOLVES.

Exhibit B: Just floating down the river, doot-dee-doo, and – what’s that? Morgan has suddenly joined a herd of elk? No, Morgan, you can’t go live with the elk in the wild . . . you have all the toilet paper in your boat. We need it. 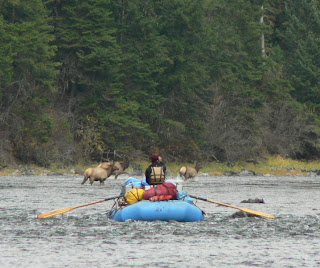 For more amazingness, I reached out to the Winding Waters River Expeditions guide staff, asking for things they’ve witnessed on the river that either made their eyes shoot out of their heads on slinky springs like cartoon characters, or were just super-cool.

First up, Patrick Baird. Gearboatman extraordinaire. Seen here practicing for his high school graduation photo, but if he ever releases an album of folk-alt-spoken word-synthesizer jams, this would make a sweet cover. 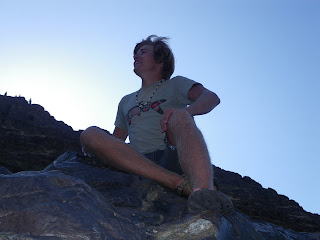 “One thing I never would have seen had I not been in Hells Canyon was a golden eagle kamikaze-bombing a spike bull which sent that there elk a buckin’ and a kickin’ like a Jo Days bull. Pretty cool sight.”

[“Jo Days” is shorthand for the Chief Joseph Days Rodeo, a major Wallowa County summer attraction that many Joseph residents who live next to the arena look forward to because they get to leave town.]

Next up is Mike Baird, Patrick’s dad. Seen here in a picture after jumping from Sturgeon Rock on the Snake River in Hells Canyon . . . but it sure looks like he just got done fist-fighting a rapid or wrestling a sturgeon or something. Looks like he means bidness. 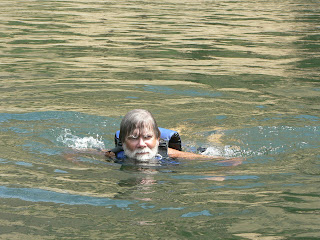 Mike was on a Hells Canyon float trip years ago when the folks in the boat in front of him began pointing up on the hillside.

What makes two big healthy deer shift gears into pell mell mode? Maybe the mountain lion chasing them, maybe they were just in the mood for a footrace. Hard to say.

Both deer got away.

These wildlife examples are out of the ordinary, but honestly even an uneventful day on the river is extraordinary. 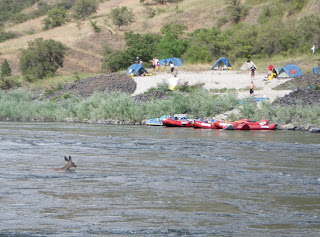 Check out what a typical day of whitewater rafting involves with Winding Waters and match that with a trip on the Snake, Salmon or Grande Ronde. Make sure to bring the camera for the sunsets, wildflowers, cougars chasing down deer . . . pretty shots of the beach, golden eagles swooping down on elk, or, you know, whatever.