Attention all units: Rafting season is underway. It’s a go. Operation Have A Blast Whitewater Rafting is in progress. Proceed to the Snake River in Hells Canyon, the Lower Salmon and Grande Ronde Rivers for grade-A good times, over.

Two launches hit the water this week, with the Joseph High School Seniors rafting down the Grande Ronde and a Forest Service botany research team scouring Hells Canyon for science and stuff.

Winding Waters gathered the troops for a preseason meeting and work party last weekend so we could practice whistling while we work and eating super good food after a job well done.

The job was picking up garbage along the stretch of Imnaha Highway that Winding Waters heard singing “The Sun’ll Come Out Tomorrow” and decided to adopt. 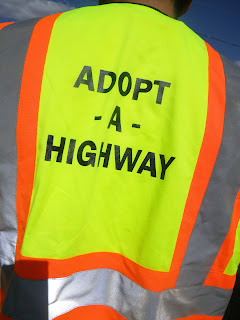 That stretch of road has come a long way in a few short years and is now pretty slim pickin’s in the trash department. Which is nice to see. 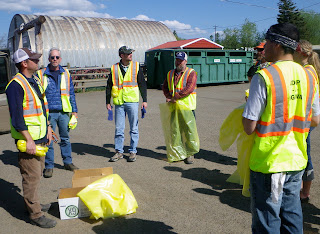 The boathouse has always had a nice country feel to it, what with Penny’s horses and the big view of pastures and mountains. But things are downright Old McDonald these days with an oink-oink here, a cluck-cluck there, here a garden, there a garden, everywhere a farm fresh something or other. 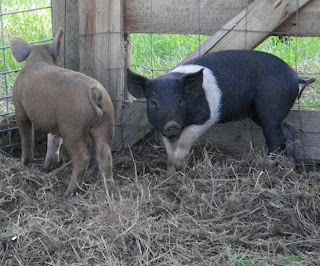 I’ve been on a fair number of river trips with Winding Waters and do not recall anyone ever going hungry or complaining about the food. Ever. To the contrary, there’s a real emphasis on good eats and plenty of them.

We try to prepare exactly the right amount, edging toward a little more just in case. And some of that little more, sad to say, has in the past not made it past the leftovers stage as fuel for the gearboat crew. 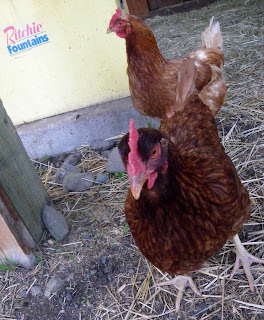 And since I saw the baby chicks shortly after their arrival at Winding Waters Farm, I can say with confidence that I’ve solved the mystery and the chickens came first. Then the eggs. Although the chicks must have came from eggs, so . . . I see now why it’s hard to solve that one. OK. 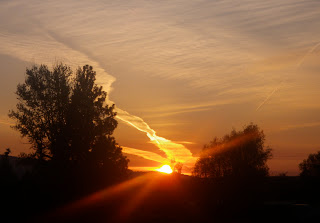 I’ll leave you with this snapshot of the sun going down in the Wallowas recently. The picture doesn’t really do it justice, but those contrails were sort of pouring out from where the sun was and Bruce Macke, who I was looking at this with, announced, “It looks like a river.”

Which is exactly what I’d just been thinking.

Bruce has spent a good deal of time on the water and his son Sam is a Winding Waters guide many of you have met.

It doesn’t look anything like a river in this picture, I’ll admit. But it sure did a few minutes before. Or maybe we were just seeing what we wanted to.

I don’t know. But if you want to see a real river, give Winding Waters a jingle and we’ll put you on an honest to goodness river, complete with a sunset you can look at and decide whether it resembles anything.

What would you rather be doing?