Winter arrives in the Wallowas 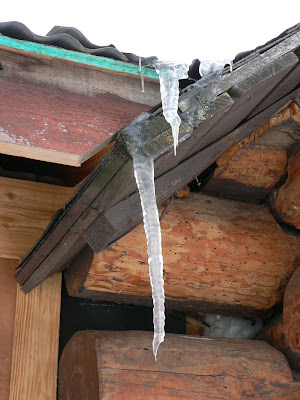 Ah, the first weeks of winter . . . the trainquil silence as you slide into an intersection because you haven’t got your snow tires on yet. The merry crackle of your neighbor’s flue fire livening-up a late afternoon. Waking at 3 a.m. to the happy sounds of your roof shingles being peeled off in a violent wind storm. It’s a time to relect.

Reflect on why in the hell you didn’t get your fishing boat put away sooner, now that it’s got a frozen block of ice up near the bow you’re going to have to chip out in order to move the thing. And reflect further on how your friend Dave borrowed the boat months and months ago, managed to break it and that’s why you didn’t take care of it sooner – because Dave was supposed to.

Such a peaceful time of year. The gentle whir of electric meters hustling around and around trying to feed electric heaters to stave of single-digit temperatures. The gentle tinkle of ice crystals calving off ruptured water pipes.

Ah, I’m just making stuff up now. I don’t have electric heat or broken pipes. That thing about roof shingles is true, but all patched now – thanks to rafting equipment, as I had to rope myself off and for lack of a harness, used my flip line and carabiners that were hanging by my door after our last river trip. 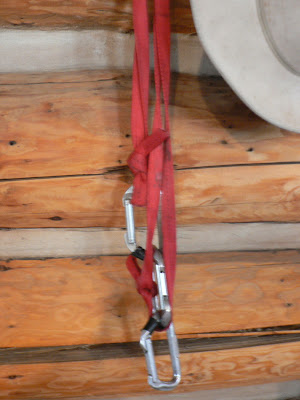 The block of ice in the broken fishing boat is also true. Here it is. 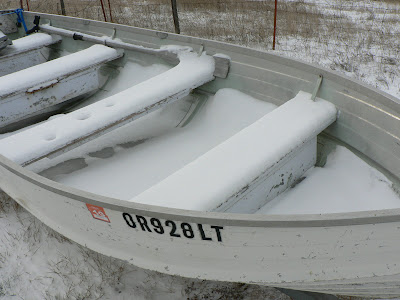 But let’s shift our focus away from that, shall we. Yes, I think it’s best.

Tundra swans. That’s the good stuff. I was out stoking my wood-fired hot tub over the weekend and half a dozen swans flew over. They don’t really honk. It’s more of a . . . a . . . not-honk. And their necks are quite a bit longer than the geese that usually fly by. Impressive. I didn’t get a photo, so here’s an artists rendering, which is really more realistic than if I would have gotten a photo. Except there’s only four swans in this rendering, not half a dozen. But you get the idea. 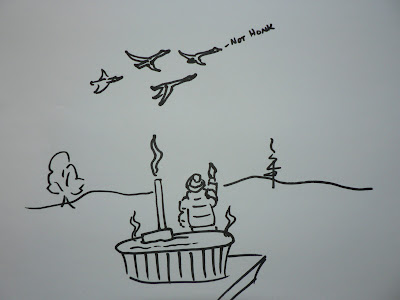 Speaking of impressive, lay your eyes on this here fish that Tom our fishing guide helped attach to the end of a fly rod recently. That is a big, big fish. 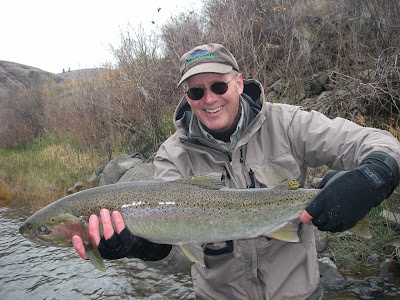 And there’s more where that came from waiting for you in the Grande Ronde, Wallowa and Imnaha rivers. Maybe add another layer of longjohns under your waders and bring along the mittens. And have a thermos of something steaming hot at the ready. Then you’ll know you’re really winter steelheading. The payoff? I mean, look at that fish. Just look at it.