Yodeling Down the Salmon River

Behold this sunset, why don’t you… 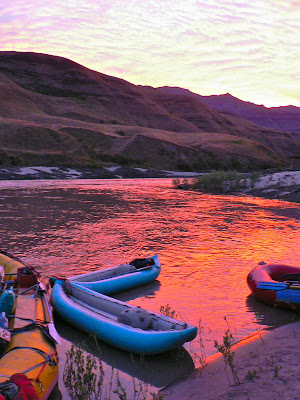 That right there is along the banks of the Salmon River. Had ourselves a swell float down that ol’ stream last week with Paul, Craig Nichols, crewmember Dane and his family, plus longtime Winding Waters pal Bo Roth with her husband and son.

What’s that? You wonder what the sky looks like without all those beautiful sunset tints getting in the way?

Okey-doke. Here’s a big ol’ patch of blue above the shadows inside Blue Canyon, taken mid-morning as we wandered out that last finale of a canyon before hitting the confluence with the Snake River and bobbing into Hells Canyon. 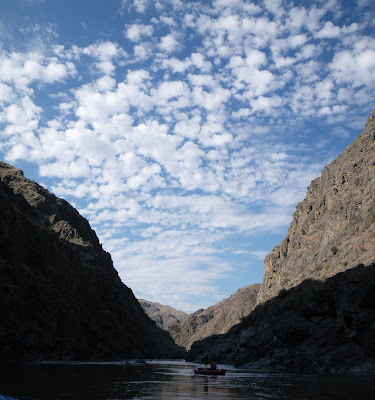 See if you can spot the boat.

There are many, many places less cool to be than Blue Canyon. Unless the Salmon is running above, say, 18,000 cubic feet per second, in which case I would be a puckered mess where this photo was snapped, as it’s above The Slide Rapid and while you can slide down The Slide at low water, the rock slide that formed the rapid and lent the name creates a maelstrom you don’t want to tangle with. So there’s that. But at low water, it’s a breeze and Blue Canyon makes for top-drawer floating.

We encountered a rattlesnake on the last evening. He — or she…there were no long cartoon eyelashes for me to tell the difference…the snake was just sitting there, or coiling there, down the beach a ways.

We’ve never had a problem with rattlers. They’re around, but if you do cross paths they rattle for a reason and we leave them be or remove them from camp using high-tech snake wrangling devices like a kayak paddle and a box.

Unless Craig is along. Craig Nichols is a local rancher. He and wife Liza Jane raise the dee-licious 6 Ranch beef we serve on the river. And somewhere along the way of his cowboying, he says he either had to learn to handle snakes or be afraid of them. So this rattler is discovered and I bravely offer the advice that the best thing we can possibly do is leave it alone.

During our wilderness medical training, the instructor pointed out that the majority of snake bites happen to boys, or young men, and the bites are usually on the arms. Because they’re messing around with snakes. So I mention this, but people are naturally curious so Craig says, “you want to see it?” And marches down the beach, picks up a stick, pins the head of the snake down and then grabs it behind the head and holds it up for inspection before relocating the serpent far from camp. 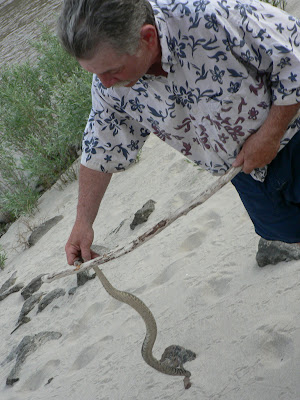 S-s-s-s-s-seriously…the only thing Indiana Jones and I have in common is an aversion to this.

You would have to pay me approximately 4.7 million dollars to pick up a rattlesnake. Maybe more.

So Craig has the snake handling down. Plus another skill not everybody can pull off. Watch this here video to see, or hear, what I’m talking about as Craig tests the acoustics inside Blue Canyon.

And we’ll see you on the river.