I came across some unlikely deer out on the Zumwalt prairie last week. The one on the left, as you can see, has two heads. A nice buck growing out of the top, sharing a body with the doe, who is grazing. Hmm.

And the deer on the right also has two heads, one fore and one aft. Double hmm. I bet they fight a lot about who faces forward when they run. 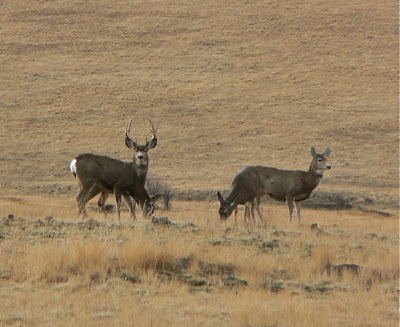 Explain that, Darwin. And get P.T. Barnum on the phone. I think he’ll like this.

…through rain and wind and weather, hell bent for leather, keep them doggies rollin’…

Came across this morning commute on the Dug Bar Road, coming out of the Imnaha Canyon. I didn’t really have a beef with this, as we get so little traffic out here in Wallowa County I don’t mind the occasional holdup for cows to pass. I think of it as part of the process, like defrosting hamburger. 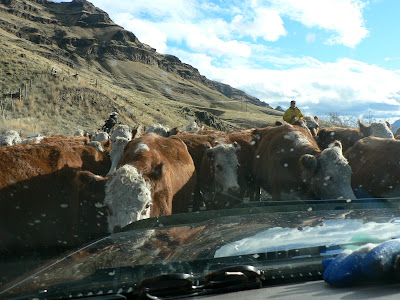 I was down there on the Imnaha helping Mike Hale get some fenceposts across the river, which was on the high side. Eventually got a good system figured out but the trial and error phase got a little bit on the exciting side. There’s some pictures coming that I’ll put up later.

Boat straps are the handiest thing on earth. They have a little metal cam you pass the strap through, are easily tightened, incredibly strong and perfect for lots of uses other than keeping gear on your boat.

My wad of NRS straps has become standard equipment for cutting wood. I’ve used straps for securing a pulley to trees, but mostly like them for insurance when carrying saws and gas tanks out of the woods. Some folks just slide the bar of their saw down between rows of wood, but me no likey because the load can shift and running straps can cinch things down while making sure your saws don’t find a way to leap off your truck. Earlier this year I got ambitious and loaded up a tower of firewood rounds that took every strap I had to keep things on board. It was on the precarious side, but worked.

And she’s probably right, but then it shouldn’t be only a river guide. But some NRS straps and throw them in your rig. Guarantee you’ll find a use for them. And that right there is the Gearboat Chronicles gift buying guide for 2012.