Whitewater botany and the unique plants of Hells Canyon

Hells Canyon is a lot of things. Big. Beautiful. Dramatic in many ways. One reason I enjoy running the same river in different seasons with different people is learning something new and seeing the river from different perspectives.

Taking botanists down the Snake River in Hells Canyon to survey for rare plants has sent more knowledge and Latin flying over my head than I can recall, so I asked Forest Service botanist Gene Yates to give us a rundown on some highlights of why Hells Canyon is unique in terms of things that grow down there. 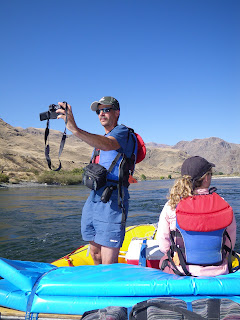 I’ve been on three river trips with this Yates fellow – no, make that four. He also came with us on the Salmon River strictly for fun with his son Connor. And by ‘strictly for fun’ I mean he still had a scientific tome with him that he referenced while surveying plants. Like we all do on vacation.

But I find he’s good at explaining things to someone who hasn’t had a biology class since high school. So here’s an inside look from someone who knows what they’re talking about on what to look for in Hells Canyon that you won’t see elsewhere. 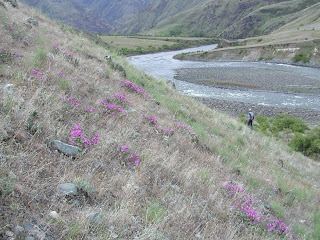 Many plants are unique, or in botanical parlance, endemic to Hells Canyon; that is, they grow nowhere else. One of the more striking plants is the MacFarlane’s four o’clock (Mirabilis macfarlanei), named for its discoverer, Ed MacFarlane, an early pioneer of motorized boat transportation up the Snake River.

OK, I fibbed, the four-o’clock is not technically endemic to Hells Canyon; it also grows along grassy slopes that line the Salmon River, but it is a unique species, threatened under the Endangered Species Act, and so far as can be determined, with a stable population in Hells Canyon.

It grows near Pittsburg Landing. Under ideal conditions it can be seen blooming along the eroded sediments deposited from the great Bonneville flood (about 15,000 years ago) as you bounce through the rapids downstream of Lower Pittsburg Landing, around the bend from the boat ramp.

Although generally of interest only to plant geeks like myself, here’s a link for more information on Macfarlane’s four-o’clock.

[Gearboat note: I found this interesting, even without being a plant geek. Authored by Mr. Yates. Worth checking out.] 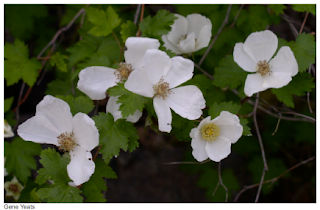 Another endemic plant, the Bartonberry, is named for Lenora Barton, matriarch of the Barton family that homesteaded in Hells Canyon, who first noticed this plant as being unique.

The Bartonberry (Rubus bartonianus) can be seen at the Hells Canyon launch and along rocky slopes of the upper canyon. Superficially, it resembles currants or gooseberries, but is closely related to thimbleberry (Rubus parviflorus). It’s large white flowers bloom from late April to early May.

For more information on bartonberry, here’s a one-pager from Oregon Rare Plant Guide.

And here’s a status report on bartonberry following the 2010 bartonberry survey trip, written by ecologist and botanist Jenifer Ferriel.

[Fun fact: that’s Jennifer checking out the waterline in the post from last week.]

From Prickly Pear to Paintbrush 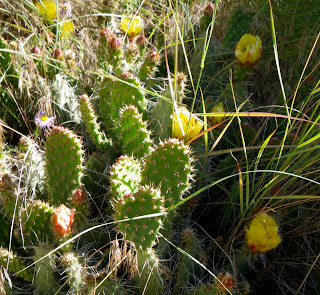 Best appreciated when not barefoot. Trust me.

Many other beautiful wildflowers, endemic or widespread, are abundant along both the Snake and Salmon Rivers. Hells Canyon has masses of prickly pear cactus, a plant not normally associated with the Pacific Northwest. From late May through June, the prickly pear blooms in profusion with large gobs of yellow to salmon pink flowers, the delight of bumblebees, beetles and botanists. And that’s only a start. Penstemons, paintbrushes, phlox . . . it’s a riot of color.

Good Coffee and Surveying by Raft

Rafting is actually a great way to see and experience the wildflowers of Hells Canyon or the Salmon River.  One of the reasons we choose raft transport (over jet boats) for rare plant survey work is the slower pace allows us to carefully examine the shoreline and near slopes.  And we can conveniently stop at areas we want to look over more closely on foot. Rafting also leaves a much smaller carbon footprint. And having good, dark black coffee – coffee for coffee drinkers – waiting for you after you rise in the morning, and dinner waiting following an early evening hillside hike is more the bonus. 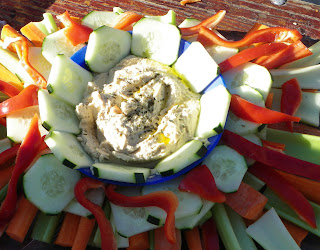 Although one should be advised, on the water, you do get wet. It’s called whitewater rafting for good reason. One memorable trip last September, as Jon was negotiating the Wild Sheep Class IV water, the lip of a Charybdis-sized suck hole grabbed the right tube, promptly pulling it under, putting the raft into an unsettling 40 degree lean. The gear was snuggly tied down, we were not.  Fortunately, I was on the left and my botanist colleague in arms, Jerry, proved a reliable step stool and I was scarcely doused. Jon ably pulled us back out.

[Gearboat note: I haven’t the slightest notion what a ‘Charybdis’ is, but it sounds exciting. Thanks, Gene, for the inside scoop on unique plants in Hells Canyon and the Salmon River.]