A Fishing Report You Can Ecotrust 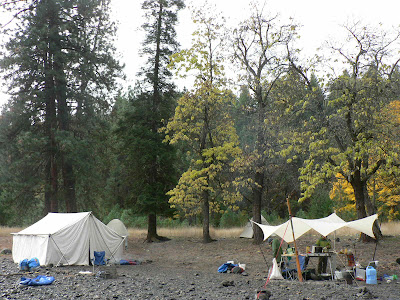 Second cast. One of the fishermen on our last Grande Ronde trip latched into a steelhead not the first time his line hit the water, but the one right after that.

The next fish was tugging on another line within two minutes.

The catch rate wasn’t that fast and furious all five days of the float, but when the guys coasted into camp each night they generally reported one or two fish per person per day. Things in this world are either shabby or not shabby. That’s not too shabby.

The steelheaders on this jaunt down the Grande Ronde were Spencer Beebe, president of Ecotrust, with cohorts and colleagues Bill, Dave and Mariusz. That last name is pronounced . . . you know what, just sound it out. 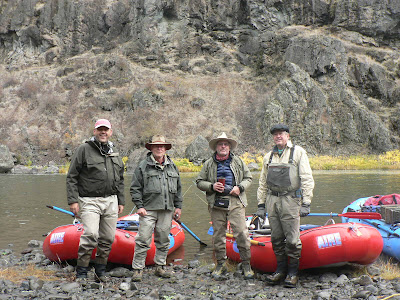 That’s Mariusz on the left. Champion spey caster. I saw him launch a cast that crossed the entire river, looped around the earth and came back around to lay the fly down just as pretty as you please ten feet upstream. That’s control. Mending the line was even more impressive.

Bill is over on the far right. Don’t play cards with him because in my experience he will beat you. He’s gracious about it, but he’ll still beat you.

That’s Spencer there, center-right in blue. Also has a rocket-launcher of a spey cast. Part of it’s solid technique, the rest is energy from the singular coffee blend he’s drinking there, which involves cocoa mix, sugar, cream and coffee in pretty much equal parts. I think you could hook two wires up to the lid of his thermos and advance the field of fuel cell technology.

Interesting fellows, all. I could go into what I gleaned of the background on all these guys, which I probably should because it’s worth hearing and they’re doing good work, but, hey, they were on vacation. And it’s like that old saying, the one where whatever happens on the Grande Ronde River stays in Las Vegas.

So we’ll set their professions aside for now and just consider them a bunch of buddies catching fish, playing cards in the wall tent after dinner and enjoying the Grande Ronde canyon during a nice time of year when the tamarack trees impersonate gigantic yellow torches and the occasional rain spatters make you appreciate it when the sunbeams fight back. 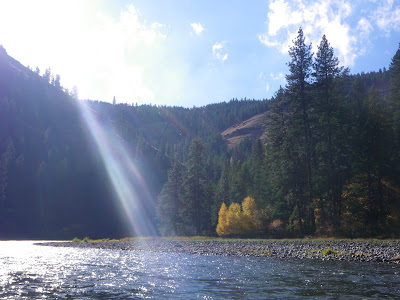 Saw two mountain goats up on the cliffs from one camp. Here’s a blurry picture taken from afar to prove it. 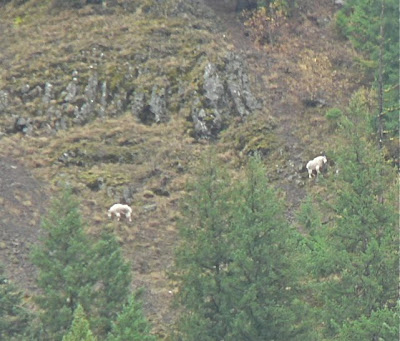 We made over ten miles the first day, then did legs of five to six miles after that. Those first two fish I mentioned were caught on the last mile of Wallowa River before it joins the Grande Ronde at Rondowa.

When we floated past Red Rock Rapid I recognized a guy fishing from the bank that I’d talked with in town a couple days earlier. He told me that last year he caught 235 steelhead. Don’t look at me like that, I’m just reporting what he said. This particular morning, though, he was getting skunked. Better get catching, bub. 236 is a long way away.

Aside from that feller, Mr. 235, his amigo and two fly fishermen along the upper stretch, we didn’t see a single person outside of our group during the five day trip. There was another group ahead of us, judging by the trash they left behind at the campsites we happened upon after them. Really? Just going to toss a whole onion into the bushes like that? OK. Couldn’t find a place for those eggs shells after eating your hardboileds, I noticed. All righty. Watch your cholesterol, friend. There were a lot of eggshells scattered around.

I talked with fishing guide Tom Farnum today and he’s predicting an onslaught of returning hatchery fish this week. Morgan and I are due to take another lap on the Grande Ronde, launching Wednesday, so I’ll get back to you with results next week.

Paul, Penny and wee baby Linden are down in Troy and I expect he’ll be posting results when they get back.

I’m headed for the Imnaha tomorrow to investigate reports that the fishing’s been treating folks right down that way.

Steelhead fever is upon Wallowa County, people. Catch it. Or them. Or…you know what I’m saying.