Catch Your Own Fish, Bull Trout

Getting a frying-pan sized twelve-inch rainbow trout to the bank was not much of a struggle. Until all of the sudden it was. He surged and went on a run, taking line off my reel and I thought . . . what should I be thinking here, because I don’t know what to think.

Is this fish on the juice? How does a rainbow trout even manage to get it’s fins on performance-enhancing supplements?

Then I saw the bull trout, taking my smaller fish upstream. Had the little fella locked in his jaws and I’ve seen this once before, a smaller fish getting the Jaws treatment from a bull trout.

I angled the two not far from the bank and gave a mighty heave, trying to land both with one fly. Didn’t work, the bull trout released before getting flipped onto the rocks, but that trout was definitely wondering what he’d done to deserve this. I could see where his scales had been in the mouth of the bull trout and those things are aggressive, no doubt about it.

Here’s a picture of another bull trout, caught last week on the upper Imnaha. You can’t keep these fish and the penalty if you do is something like two broken knee caps and they make you listen to Kenny G in prison for a year. So I sent this guy back to the river. 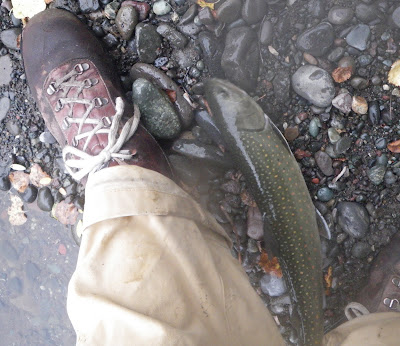 Note the white marks on the fins. That’s how I was able to identify the perpetrator that attacked my rainbow trout.

Here we have a nice mug shot of the snake that almost made me poop my pants when I nearly stepped on him. 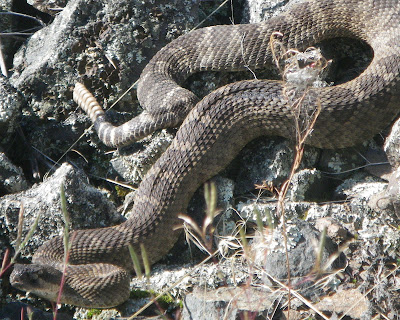 Should have been watching the trail instead of peering over the bank to check out the next fishing hole. He didn’t even buzz, which contributed to me screaming like a girl as I took a step that would have put my foot right in front of the viper. Good times, good times.

I spent the week on the upper Imnaha River, ten miles upstream from town. Been hearing reports that the lower river has been producing in the steelhead realm, but there’s just not that much water up where I was and if they’re up that high, I sure didn’t catch one.

The occasion was a Fishtrap writing retreat held at the unique log home owned by Doctor Mike Driver. Great spot and had a great time, including missions with the flyrod to see rattlesnakes and catch trout. First, take two old speakers. Strip those down to the magnets. Whittle some sticks so they fit inside the holes. Dab on Gorilla Glue for peace of mind. A few sheetrock screws here and there. Tie on a couple bungee cords. Go fishing. No more breaking down your rod when you hop from one spot to another. I wanted to use duct tape somewhere in the process, but couldn’t figure out where to apply it. Very unusual.

There’s talk of a Winding Waters field trip tomorrow down to Troy. Steelhead whisperer Tom Farnum, Papa Paul Arentsen, Morgan and myself are going to drag some feathers with hooks on them through the waters and see if we can’t attach a fish to the other end.

Wish us luck…or wish yourself luck and get over here for some steelhead activity on the Grande Ronde. It’s picking up to the point you may not even need the wishes.