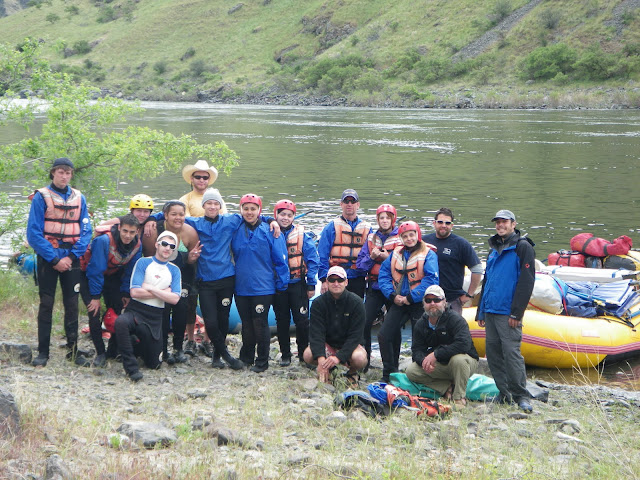 Aaaaand, we’re back from a Hells Canyon trip with our friends from The Center for Alternative Learning in Hood River.

These are the same kids I shared a memorable float with last spring on the Owyhee River. That trip featured headwinds so strong they went beyond headwinds…more of a head-and-shoulders-hunched-into-it wind.

At one point we considered surrendering after scratching our way downstream all day, trying to make miles against the wind tunnel. We had passed a camp earlier but pushed on until daylight started getting scarce and there was serious talk of letting the wind push us back upstream to the earlier camp. And it wasn’t a bad plan. Normally unthinkable, but it would have been far easier than going downriver. That, my friends, is wind.

So I got to see familiar faces last week and meet students that weren’t so lucky to be on the Owyhee Endurance Challenge. The kids did all the cooking, and did a bang-up job. Especially pasta night, featuring Gianni’s Italian meatball magic. Gianni’s a guide for Wet Planet over in the Columbia River Gorge and rowed gear for us this journey.

I did miss Tuna River Surprise, a special recipe we had for lunch on the Owyhee last year. It calls for some unusual preparations involving ropes, pulleys and more water added to the tuna than usual. We never had a chance to make it this time around. Secret recipe, sorry, can’t share it.

Granite Rapid had enough Snake River water flowing for the Green Room drop to be open this trip. You approach a horizon line, see the boat in front of you dip out of view, then roar back up the other side…then your boat gets to the lip and you look down into a roller coaster wave cupped inside a big, glassy green bowl.

We asked the students what their highlights were from this trip, and the answers ranged from cooking pancakes for the first time (turned out better than the pancakes I make, after years of practice) to the fun of getting rained on in the middle of the night.

I assumed this was sarcasm, but Eddie seemed fairly genuine about not being bothered by being pelted awake by an evening spring rain shower. And that’s just one of the things I like about these kids. These Hood River youngsters are tough. And they find fun even in headwinds and spring rain showers.

A young paddler in my raft was nervous about rafting and bears as we pulled away from Hells Canyon Dam. We discussed rafting and bears, and how she shouldn’t be worried. Midway through our first big rapid, she was laughing harder than anyone else in the raft. We got to the bottom of Wild Sheep Rapid and she said, ‘Let’s do it again.’

A little further downriver, as we scanned the canyon walls for wildlife, she’d changed her mind about bears, too, and now hoped to see one.

We didn’t see a bear this trip, so she’s going to have to go rafting again. And that’s good. Something to look forward to.