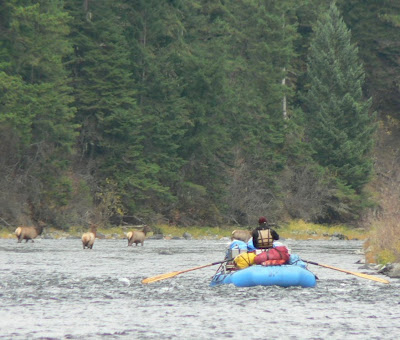 Low water rafting is a challenge. Take for example this photo of Morgan last week negotiating a stretch of the Wallowa River above the confluence with the Grande Ronde on one of our Winding Waters camp support steelhead fishing trips.

You’ll notice the river is quite shallow and the boat is weighted down with the luxuries and delicacies we bring on these trips to make a nice home in the wilderness for the fishermen. See how he eases through the riffle and has to hug rather close to the bank, seeking a slender channel that offers an inch or two of relative depth which will make the difference between squeaking through or hanging up. Also, there are larger rocks lurking about that can stop your progress, making it necessary to get out of your boat to pull and push your way off the rocks.

Oh yeah, and there’s a herd of elk in the way. That too. Reading the water doesn’t usually require factoring in how a bunch of enormous ungulates during mating season will react when you float down upon them in a large inflatable vessel. You kind of have to wing it in this case.

Normally this stretch of water would probably be considered a class zero rapid on the scale of one to six. Class one being no big whoop and class six being, say, Niagara Falls. But we’ll go ahead and bump this one up from a shallow non-consequential yawn to probably a class five-plus, seeing how Morgan was fairly sure these elk were about to attack him.

But Morgan is a professional and maintained his cool. Notice in this next photo how he turns the situation to his advantage by shifting his focus from trying to find the tongue or other telltale indicators of deep water, and just follows the stampeding elk herd instead. Nice line, Morgan. Way to use local knowledge. 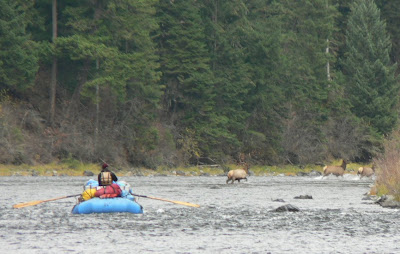 Another detail you might notice in these pictures are the wooden oars. I had a pair similar to that on my boat, and I say ‘had’ because I broke, um…two of those on this outing. Not one. Two.

The first splintering crack came roughly, oh…say, eighty yards after we pushed off from the put-in at Minam. I went to pivot around the first of many, many rocks I would encounter on this run and during that pivot my oar blade came to rest on the bottom, pressure was applied and the blade promptly cracked and folded.

All righty then. Joanne Gallagher was riding along on my raft and she kindly offered to take over the oars after this episode. We deployed the spare and away she went. Joanne is a kayak instructor and accomplished rafting guide who we met through our friends at Wet Planet, a guiding outfit in the Columbia Gorge.

I once did a trip with Wet Planet on the Owyhee River which makes me cry in the shower to even think about. On that particular expedition I also broke two oars – those were fiberglass, so I’m really branching out. That was another low-water journey and me trying to shepherd a gearboat down that river was not pretty. Not pretty at all.

So she may have heard of my oar-breaking tendencies and was doing a fine job, rowing along – then I looked down and noticed the blade of our other good oar seemed to be cracked. She pulled it out of the water and, yep, two down. This was maybe a mile or two after our first casualty and she hadn’t really put any strain on the thing.

I figure, A) I have a curse. And I know just the witch doctor who put it on me. That’s the last time I’ll ever try to get a bargain on a set of oars in Cajun Country, argue the price and walk away. Never again.

B) Someone sawed halfway through my oarblades as a practical joke. Real funny, whoever you are. You got me.

So I stole Morgan’s spare for the rest of trip and changed my rowing technique to make sure there wasn’t any more breakage. My new style is to wave the oars furiously in the air, never touching the water, and change the direction of the boat by this fanning action. It’s a little more work, but much easier on the oars.

Paul took it pretty well at the end of trip when I presented him with the set of useless sticks that used to be his expensive equipment. In fact, I think he found it kind of funny – though he sure does laugh in a strange way. Never seen anyone swear so much and clinch their fists and jaw when they’re in a good mood. But he’s from the south and they have different ways. 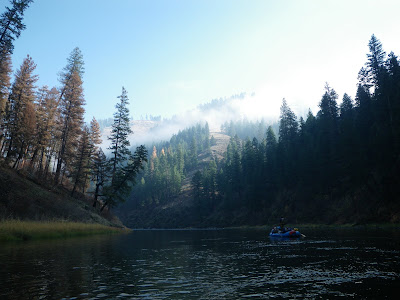 Aside from all that, many thanks to Tom Kennedy and his fishing buddies Bob, Gordon, Rick, Paul and Lee. My last encounter with Lee as I passed by headed for the takeout was hearing how he’d landed two steelhead and had one get off right there in the same spot where two channels merged below a small island. 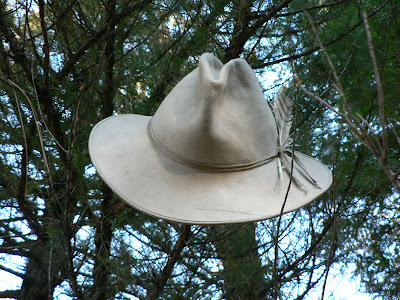 We also encountered the Invisible Man on the river. Nice enough guy. Kind of hard to read, though.