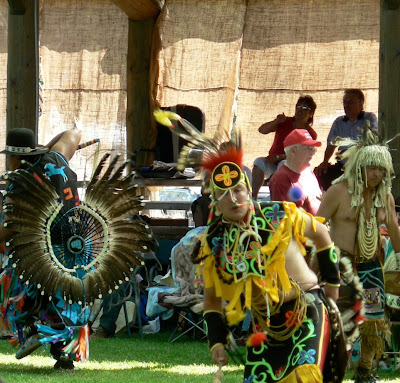 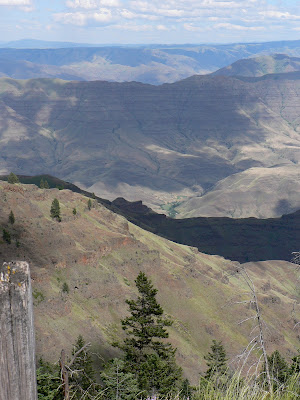 I took a week off from the river to attend Fishtrap, a writer’s conference held at Wallowa Lake each summer. Actually, that’s not true. I was out at Billy Meadows in the north country of Wallowa County where Fishtrap holds their Outpost writing workshop – a boondocks approach where writers get by living in tents without pansy conveniences like electric power or plugs to hook your laptops into. A lot like river rafting. I felt right at home except for no river.

That canyon photo up there is the vista from Buckhorn, looking down on the Imnaha Canyon which feeds into the Snake. It’s extra-large as far as views go.

Gary Snyder, the beat poet legend, was the keynote speaker at Fishtrap this year and let me tell you, he’s worth listening to.

I got down to TamKaLiks on Saturday – the Nez Perce celebration held outside of Wallowa each summer. This gathering is connected with the Homeland Project, which acquired 320 acres as a permanent place where people who have called this place home for thousands of years can come home.

If you’re not familiar with the Nez Perce history of Wallowa County, I’d steer you toward Alvin Josephy’s book ‘The Nez Perce Indians and the Opening of the Northwest.’ There are many books about the Nez Perce War, but this one, I think, is one of the best.

Also read ‘Yellow Wolf: His Own Story’ for history like it should be told.

Taz Conner was a Nez Perce man who kickstarted TamKaLiks (a Nez Perce word that means ‘From Where You Can See The Mountains’)….the celebration has been going for 20 years now and when Taz helped start it, he observed that this should be done for the next generation.

I interviewed some of that generation on Saturday – talking with young dancers from 6 to 19 years old. A photographer friend has been collecting photos from TamKaLiks and we hope to collaborate on a story. I’ll link it up here once that happens.

Ian Sampson is one of the dancers I talked with. There’s a photo of him in action up above. He’s rafted Hells Canyon once before and I’d like to get him down there some more. Paul, Penny and Morgan have always been very supportive of getting kids on the river and we’ve been working on organizing a trip to get native kids on a float trip through Hells Canyon. Ian has experience as a counselor and I think will be a great help if we can pull this off.

I’m headed up to the boathouse right now for finishing touches on a Salmon River trip. I’m looking forward to sinking my toes in that sand.

Paul, Morgan, Baird, Young Baird and Craig Nichols are on the Snake River as we speak, floating Hells.

Be good. Put your sunscreen on. Drink lemonade and enjoy summer.