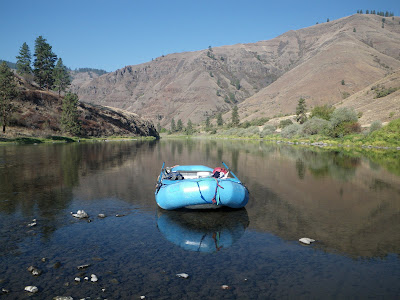 By the power vested in me by Winding Waters Rafting Expeditions, I hereby congratulate Mr. and Mrs. Mike Zobott, newly married this past weekend. Aside from getting a very cool last name that rhymes with ‘robot,’ Mrs. Zobott has also married a guy that’s been bitten by a rattlesnake – twice – and is handy in the kitchen. I’ve seen him make pasta noodles from scratch on the river, rolling out the dough with a water bottle. Now that’s culinary skill. Whatever, Iron Chef. Try being a Nalgene chef. Many happy years to you two. And here’s a photo of Mr. Zobott modeling a flotation device adult diaper, which may have no practical application, but looks cool. 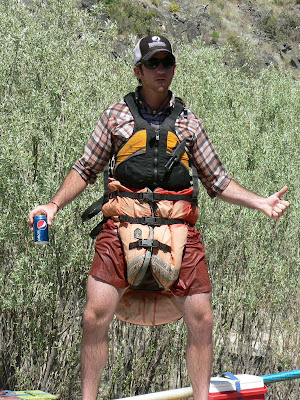 I missed the wedding, I’m afraid, as I was rowing a boat down on the Grande Ronde. The good news is that the steelhead have arrived in enough numbers that I was able to attach one to the end of my fly line.

The weather was ridiculously nice last week. Sunny, probably in the upper 80’s. T-shirt and shorts weather. The fish weren’t terribly active, likely on account of all the sunshine I guess. I was floating down with a weed spraying crew, who were targeting the noxious weed known as leafy spurge, which coincidentally rhymes with ‘scourge.’ It looks like this: 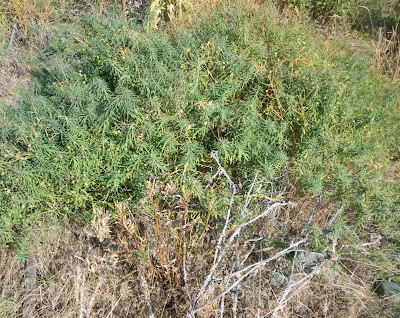 And the tattoos on Justin, one of the hard-working weed guys, look like this: 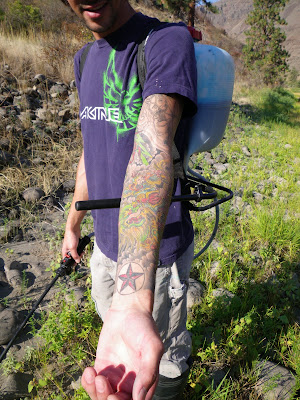 We hopped down the right bank of the river, spraying areas that can’t be reached otherwise. But the road from Boggan’s Oasis up past Troy to Wildcat Bridge runs along the river on the left side, so we passed quite a few fishermen and the general response was that one or two steelhead were being caught and things should be picking up before long.

Lots of spey rods down there. Most guys swinging. I caught my steelhead on a prince nymph with an orange head, and there was no question when contact was made. It was right at the end of my drift and I was getting ready to make another cast, then – bam – it was fish on and he was feisty. A wild fish, not exceedingly huge, but made a few runs and this was the first spot I’d got my line wet in so I hadn’t thought to put my camera in my waders yet. So no picture, but close your eyes and imagine him. He’s a beauty, ain’t he?

I’m headed down to the Imnaha River for the week, not boating but going to the Fishtrap Writers retreat on the upper river. I aim to find out if any steelies have made it up there and will report back. Meantime, give our steelhead expert Tom Farnum a jingle if you want to get in on the Wallowa County steelhead run. We’re also running deluxe camp support trips this season, where you concentrate on catching fish and Winding Waters takes care of everything else. You roll in to camp, kick back in the wall tent and enjoy some gourmet cooking before hitting the water again next day. Call Paul to talk more about it: 877-426-7238.