Now, let me explain. Yes, this appears to be a drunk dog. It is not. She’s only buzzed. No, no. Not true. The only thing this husky was drinking was the pure waters of the Imnaha River. But she did lay down all pie-eyed next to a bottle of Wallowa County-distilled Stein bourbon. A gift from Ed and Jean at the boathouse birthday bash. And it makes a fine photo, does it not?

The pooch seen here is Szia, a chukchi husky. In Wallowa County, that can translate to “wolf.” Hence the pink flagging on her collar to discourage a case of mistaken identity. It’s already worked once, though the plastic flagging was mistaken for a radio collar and the husky was still believed to be a wolf.

Mike Midlo took that picture. He and Kristy Athens stopped out here to breathe some air cooled by snowy mountains, though the snow was also whirling down in the sky so we boogied down to the banana belt of the Imnaha Canyon and found sun.

And a rainbow. Behold that vest on Kristy. Don’t pretend you don’t want one just like it. Nobody is believing that.

I took them to a favorite place where the fishing has been good to me. Mike approached the old chunk of concrete from a bridge that is no more the same way I approach it. Intent. Sizing it up.

I take this approach because fish will hold near the top of the run. Mike saw other promise, crawled up and had a snooze. Mike got was he was after. I do not find fish there every time. There’s probably some kind of lesson or moral or whatever in there, but I just turned 40 so I’m done with learning. 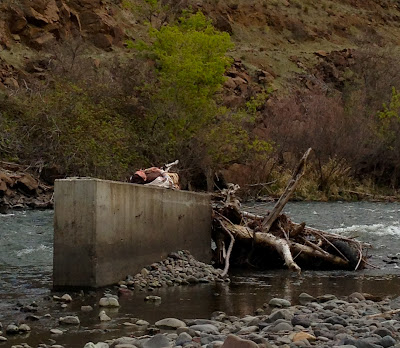 Driving out, we shared the road with a bighorn ram. Two, in fact. Other guy was down the slope. They weren’t too concerned with our presence. 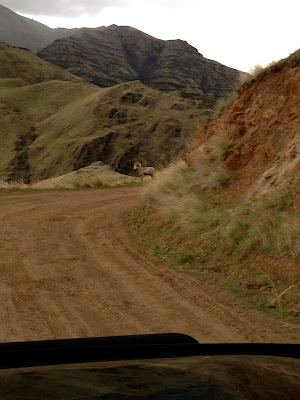 Then we racked them up for a game of cutthroat at the Imnaha Tavern. Mike won, even though I tried to cheat, but Kristy still had that vest on, so she won on the technicality of having superior fashion sense. 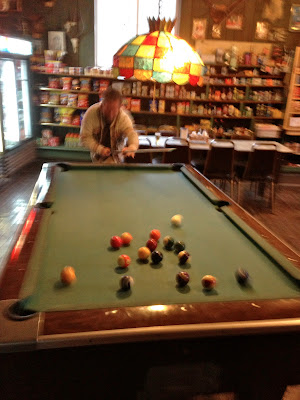 And that’s how you have fun in Wallowa County when it’s snowy up on top.

Meanwhile, back at the boathouse Penny and Linden were hard at work staining boards for the new Winding Waters headquarters. Linden is using a water-based finish. 100-percent water, in fact. She’s quite good at applying it for an even finish but the nature of that stain requires frequent coats. 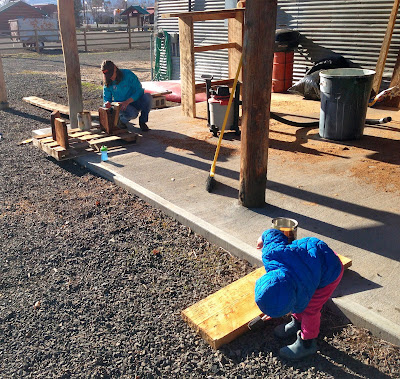 Paul and Todd just finished a new awning overhang thingy for the entrance to the boathouse store. Portico? Call it whatever you want, it looks super cool. 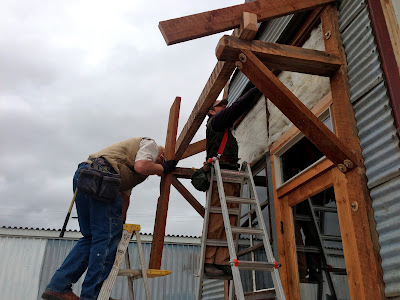 First trip of the season for me this week, going down the Grande Ronde. Weather outlook is sunshiney and I’m jazzed. Be good to get on the oars again.

Let’s go rafting. Give Paul a jingle and line it up. Hells Canyon wildflowers are getting ready as we speak.