I’m a frugal sort of guy. Don’t like to squander things. OK, I’m cheap. Call it what you will. So losing flies when I’m fishing really chaps me. Not only do you lose that fly – but generally you’re fishing it because it’s a working pattern and, you know, you just lost that fly. So it’s a double disappointment somehow. I just hate losing flies.

And I lost a fly the other day. Fishing guide Tom Farnam and I were nymphing the Wallowa, both using this here tungsten head bad boy that gets down real quick and has been very productive. 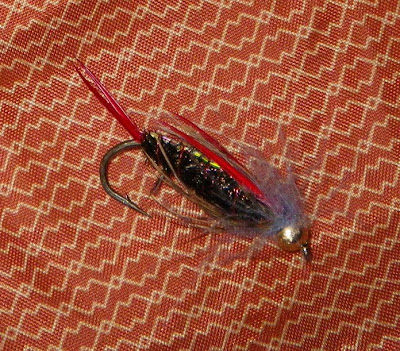 So Tom points out the juicy water for me, with all the right elements of depth, pace, structure. I flip upstream, tidy up my line and drift along the seam . . . and just where you think it’s going to happen if it’s going to happen – it happens. Indicator bobs down, I set the hook and there’s heft on the business end. With determined movement. No whitefish, this. No sucker. No trout. This here fish had steel for a head, you could just feel it. And then he came up and rolled, giving visual proof.

My first steelie of the season, I was all smiles. A little run. Takes some line. Comes up with a head shake. All is well. Another head shake.

And then nothing. Except slack. My smile, my mood, my spirits, all of that fell.

Reeled in and looked at a clean break on the end of my leader where a steelhead should have been. No curly pigtail showing a failed knot, but the line was rough. Sandpapery. I’d been bouncing it all day and been hung up. Never took the time to inspect how things were holding up and lost a fish because of it.

I gave myself a lecture on maintenance. But I didn’t want to hear it. Tom gave me a pep talk. It was a good one as pep talks go, but I didn’t want to hear that either. I cut away the dinged-up section of leader, tied on another nymph and – well, I’ll be darned – it wasn’t twenty minutes later that indicator bobbed down again and I was connected once again to a steelhead. Glory be.

This fish showed itself and Tom said, “I think that’s the same fish.”

I took a step, lost my footing and fell right on my caboose – now sitting in the water but holding that rod tip up.

Collected myself, got back on my feet and landed the fish. 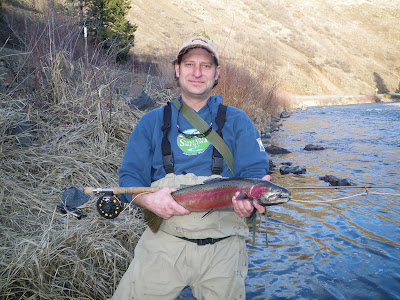 Note the fly on the right side of the mouth.

And don’t you know, Tom was right. It was the same fish. There was the fly I’d just broken off. On the other side of the mouth. Here’s the dental records to prove it. 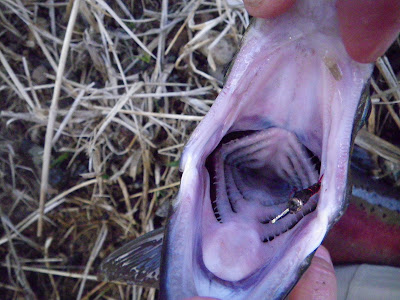 Little bit of tartar, there. I can’t emphasize enough the importance of flossing.

So I got my first steelhead of the season and my fly back. Sometimes things just work out.