In very civilized times it is reassuring to know that wild fish will run so close that a man on foot and within earshot of lawn mowers can touch their wildness with a fishing rod.

— Thomas McGuane The Longest Silence: A Life in Fishing 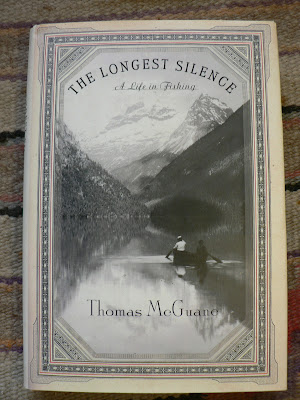 I’m already not looking forward to finishing this one by McGuane. I’m rationing pages. Cutting chapters out of the book and stashing them around the house in hidey-holes and not leaving myself a treasure map to slow myself down because sometimes you get into a book and your pace picks up because the writing’s that good and your coffee gets cold and you let the fire in the woodstove go out for lack of stoking and once you’ve latched into enough of those good reads to remember the letdown once you run out of pages — then whoah, you recognize the symptoms and go into savor mode.

It’s early yet. I’m only on page 37. But, man. Jim Harrison says this on the back cover: “In The Longest Silence I have perceived without hyperbole that Thomas McGuane writes better about fishing than anyone else in the history of mankind.”

Hyperbole by mentioning hyperbole and the history of mankind aside, Harrison might be onto something here.

It’s just that good. And the list of people I’m going to ask Santa to bring this to is on the longish side. This book came out in 1999 so I may very well be the only one who hasn’t read it until now. I just missed it somehow. I was unawares until my dad sent it my way. Thanks, dad.

Read that line again, would you?

. . . it is reassuring to know that wild fish will run so close that a man on foot and within earshot of lawn mowers can touch their wildness with a fishing rod.

Maybe it’s just me. Maybe out of context it doesn’t set off the airbag of colliding with something solid while reading. But c’mon, that’s mighty good.

I can think of a few locations you might hook and land a wild fish in Wallowa County within earshot of a lawnmower. Wallowa River, across from that mansion house. But nobody ever seems to be there. Maybe Minam State Park if the grounds crew is out. And the hole under the bridge at Imnaha, if Alazar or Yasha happen to be trimming the grass.

Everywhere else you’d have to pack your own lawnmower. Which isn’t such a bad thing.

Tell you what else isn’t a bad thing: bad weather. I mean, it is, by definition. But when, for instance, you’re driving back home and see this cloud squatting over where your log cabin is…. 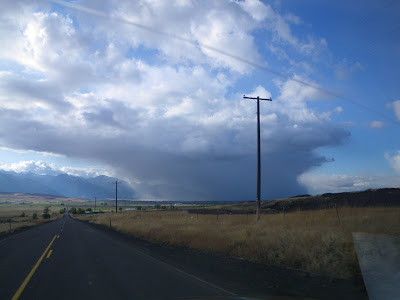 ….then, if you’re me, you say to youself, Well, I know one person who’s going to sit on the couch and read a good book after I light a fire using the to-do list of chores I wrote for myself as kindling. 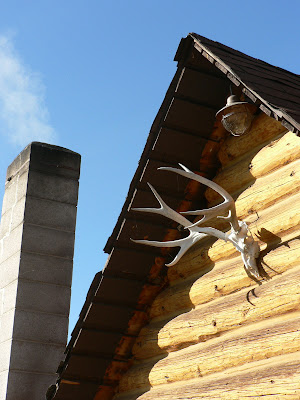 Pictured: smoke from fire kindled with to-do list.
Also four point buck skull I found on the riverbank while fishing.
Well, my dog found it but I’m the one who packed it out and nailed it to the logs.

But the weather’s kind of going our way, actually. Little bit of a chinook wind blowing through as of last night and I see the rivers are ticking up. Hopefully get some fish moving and I’m set to go test that theory day after Thanksgiving with Mike and Patrick and the rest of the Baird clan.

Meantime, have a swell holiday and might I suggest Morgan Jenkins’ Famous Cranberry Chutney, which I trust will be included in his Winding Waters Recipe Book and should compliment any Thanksgiving table.

Take some cranberry sauce. The kind with actual berries in it, preferably.

Add a good dose of horseradish. Don’t be shy. Get some heat in there.

Oh, and walnuts. Chopped walnuts. Mix some of those in there.

And, hey, who says you have to serve turkey? Why not braised Wallowa County steelhead?

I don’t know what ‘braised’ means, to be honest. Morgan’s the chef. But if you’re tryptophan-intolerant and don’t want to fall asleep on the couch, drooling on your aunt’s favorite throw pillow again, here’s an alternative recipe for this Thanksgiving:

Get yourself a large mixing bowl.

Go on a guided steelhead trip with renowned angler Tom Farnum. This is him, here: 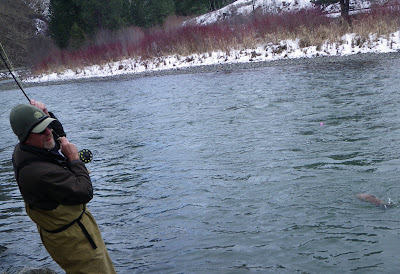 …note the steelhead on the right side of the frame.

….then catch a fin-clipped steelhead. Preferably some wild ones, too, which will delight you but be returned to the waters of the Grande Ronde River.

Prepare it. Add Morgan’s Famous Cranberry Chutney. And voila’ . . . a Thanksgiving feast to be proud of.

Put the large mixing bowl back. Turns out you don’t need that.

Then go read McGuane’s book after you watch some football.