While Winding Waters fishing guide Tom Farnum was wrestling a big, feisty wild steelhead for ten minutes the other day, maneuvering line around problem boulders with questionable footing tight between a wall of brush and a steep drop into stiff current—an epic battle by the sounds of it . . . while all that was going on, I was downstream a hundred yards or so on a nice, wide gravel bar, quietly tying on a dropper fly. Taking my time. Humming to myself. Not paying much attention except to how my knot somehow got away from me there at the last when the rabbit was supposed to go back in its hole after circling the tree six times or whatever. Stupid rabbit, get back in your improved-clinch-knot hole…why are you walking around trees so many times anyway?

Meanwhile, Tom played the monster steelhead until he got her in close enough to see that what he had here was a big, wild steelhead. The adipose fin knifing through the water like a giant mankiller shark . . . stirring classical music getting louder as the fish drew closer and the Chief of Police would have to close the beaches if Tom didn’t get this fish to the bank. Sorry. I watched Jaws the other night.

So instead of me looking up, noticing Tom with a rainbow arc in his flyrod and walking up the trail to snap a photo of a large, beautiful wild steelie—instead of that I made a few leisurely casts and caught this relatively wee trout with plenty of time to get a picture then release the little feller back to the Wallowa River. 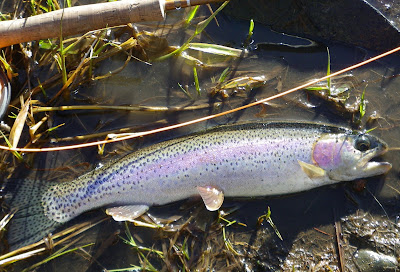 So just imagine this was much, much bigger and had swum out to the ocean and lived there awhile and then swam back and you get an idea of what Tom’s steelhead might have looked like. Close your eyes if that helps you visualize. He got his fish in, had it by the tail and because it was such tight quarters, he said he wanted to make sure such a nice specimen got back out there to make babies and let her go without holding up the show by scrambling around to get photographic evidence.

Usually I fish with people who are liars, so I would dismiss such a story and proudly show them the above photo of my trout, mentioning that it may not be record size, but at least it’s not imaginary.

In this case, though, I met Tom back at the rig and while he recounted this steelhead he’d just landed, I ever-so-slowly put the camera behind my back and felt around for the power button to turn it off, then discreetly slipped it into the pouch of my waders. I’d had the photo all ready to show Farnum when he walked up … this fish jumped twice. Twice, I tell you. But I got less and less interested with telling him about two little jumps — or hops. They were more of a hopping motion — as he described a very different experience than the 47 seconds it took for me to bring in the trout.

Nevertheless, had a great day fishing the Wallowa and plan on having more. The creel survey guy said success rates for steelhead on the Wallowa have been encouraging and Rondowa has been rowdy. More about that on Paul’s Winding Waters fishing report.

I’ve been content with whitefish and trout the last few times I’ve been out, but that patience is starting to wear thin. I can only write so many happy accounts of other people landing steelhead. If I don’t hook one before long, you can look forward to a Gearboat Chronicles that goes into great detail on the most efficient ways to get all the dirt into the dustpan without moving it back a whole bunch of times. I’ll have photos. And it will be the biggest dustpan I can find, with a cardboard adipose fin glued on the handle so you can tell it’s wild.