Another reason I like small town living is that going to a fundraiser is enjoyable. Chance to catch up with friends, kick a few bucks to some outfit you like. Most of the fundraisers I’ve been to in the big city involved a guy pointing at me through the pocket of his jacket demanding all my money. It’s just not as personal. And you can’t write it off on your taxes.

So the Frostbite fundraiser at the OK Theater was more than OK, it was fun. Here’s my “I Heart Fergi” sticker, which all the cool kids are putting on their Big Wheels:

They also had “I Appendix Fergi” stickers, but they were less appealing.

Another Fergi bumper sticker says, “Fergi: Where 2″ Feels Like 6” – which reminds me of what an ex-girlfriend of mine used to say . . . you know what, never mind.

Winding Waters guide and Corriente cattle rancher Craig Nichols worked the Frostbite auction again and navigated money from wallets to a good cause with the same ease he runs a boat through Snowhole Rapid on the Salmon or the Green Room in Hells Canyon. 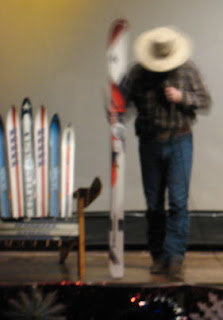 The blur you see is caused by the updraft created by 200 hands reaching for their checkbooks.

Here’s exciting news – Winding Waters is clanging the dinner bell for a new expedition with The Plate and Pitchfork Road and River Trip, launching this summer with a tour of Craig and Liza Jane Nichols’ 6 Ranch, the Carman Ranch in Wallowa and fine dining all down the line during your up-close look at Wallowa Valley ranching, local food production and then local food consumption with riverside cuisine prepared by top Northwest chefs Benjamin Bettinger of Beaker & Flask and Jason Barwikowski of the Woodsman Tavern. Click that there link up above for full details.

Aside from Plate and Pitchfork, Saddles to Paddles, Steelhead Support Trips on the Grande Ronde and the other specialty river trips Paul and Penny offer at Winding Waters, it might be time to add a Craig Nichols Riverside Concert option. We get this guy away from his ranch as often as possible to float the river and The Gearboat Chronicles has chronicled how difficult it is to bring up any activity that Mr. Nichols hasn’t checked off his list. Astronaut is the only job, to my knowledge, that Craig hasn’t at least dabbled in.

So I wasn’t surprised to hear about Craig and Liza Jane’s first date, which was skiing. At Fergi, I believe. Liza Jane was a ski instructor and kindly offered to introduce this cowhand to the novelty of sliding down snow. Craig floundered around for a bit, listened to her pointers, then tore off down the mountain in fine form, which he’d picked up from skiing since before he could remember, training with well-known ski champions and competing himself.

Notice he didn’t come right out and brag about being an above-average skier. That’s the only reason I can tolerate this guy. If anyone else boasted about once performing open heart surgery on Henry Kissinger in the back of a taxi in Bangledesh using only a ballpoint pen and his Leatherman, I’d yawn and get tired of their self-promotion. Anyhoo, you should float the river with Craig if you get the chance. Or tour his ranch on that Plate and Pitchfork deal.

Here’s a few more shots from Frostbite. Morgan winning a new school backpack in the raffle, with emergency shovel to dig out her homework: 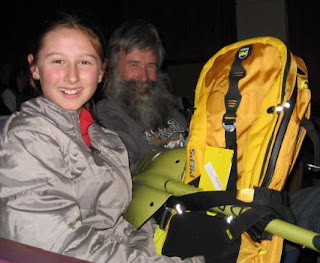 Jerry Hustafa with some Black Diamonds that Hal Morello picked up in the auction. 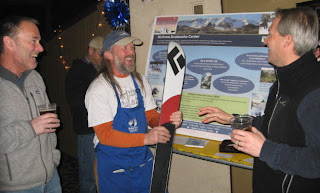 And proof the weather has been easy on the eyes out here in the Wallowas lately. Here’s the view from where I sip coffee in the mornings on my front porch – 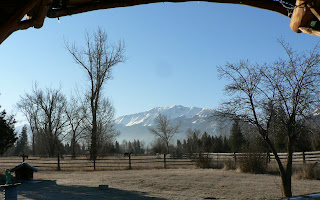 Spring steelhead season is galloping our way, fish are coming in and Paul and I are planning a flyfishing expedition down the Grande Ronde for March. We will fish our butts off during the day, sit our butts down inside the heated wall tent at night, grill some Corriente steaks, play a round of cards, tell lies, the occasional true story, talk about the fishing that day and make plans for fishing the next.

There are worse ways to spend your time.

If that sounds up your alley, check out the Winding Waters Supported Steelhead Trip on the Wallowa and Grande Ronde Rivers — you do the fishing and we take care of everything else.