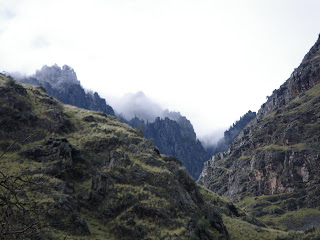 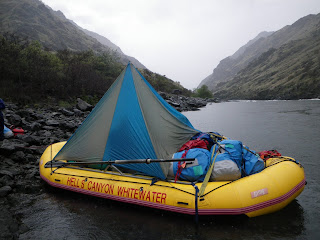 Operation Bartonberry was a success. The Forest Service survey crew found new sites and healthy populations of the thornless raspberry that grows only in Hells Canyon.

The weather tried to push us around the first night with gusty winds and sheets of rain, but it didn’t last long. Early season conditions in the canyon can be sporadic, with blue sky a mile downriver and clouds on the move in the other direction.

For the most part, we stayed in the cushion and enjoyed early spring conditions where it’s good to have your windbreaker handy, along with your camera for shots of wildflowers, wildlife and waterfalls. Here’s a few shots of wispy clouds up in the crags and Morgan’s new tent, which makes a handy shelter when raindrops do fall.

Some Winding Waters veterans have experienced the ‘Oxbow Effect’ on Salmon River trips, a shifty-weather phenomenon discovered by our weather specialist Morgan Jenkins.

You are in the eye of the Oxbow Effect when a crushing storm Morgan has predicted fails to materialize. We happened to be camped on the big oxbow of the Salmon, dug into storm bunkers under a clear, calm sky when the term was coined.

‘The Riverbank Effect,’ was in play last week during that spate of foul weather on the first night. Jordan Manley and I were up at the campsite securing the wall tent because of the wind gusts while Morgan was at the boats, maybe thirty feet down the trail and fifteen feet lower in elevation.

He came back describing the hurricane he had just survived and this just illustrates how drastic the difference in weather patterns can be a relatively short distance away.

On several occasions I’ve stood in mild winds and light showers, a few paces from Morgan who was busy weathering a major punishing storm of epic magnitude at the same time. My storm preparedness strategy is to maintain a distance of three to fifteen feet from Morgan, which generally keeps me out of the path of most severe storm patterns.

I will say this: it’s good to have someone that vigilant keeping an eye peeled for bad weather and not once have I been caught unawares by a tropical Pacific Northwest hurricane while on a Salmon River, Grande Ronde or Hells Canyon rafting trip with Mr. Jenkins.

We saw a curiosity at the mouth of Battle Creek, which is where Lenora Barton first noticed that odd raspberry bush that ended up with her name. We all heard a splash, turned and saw large rings, then a steelhead jumping all the way clear of the surface. A dark red male rocketed out, shaking his head, almost walking on his tail. He went under, came up and did it again. And again. Then stopped. It reminded me of humpback whales I’ve seen doing similar leaps.

One of our crew said they’d seen such a thing before and heard a theory that the steelhead have spawned, know they’re on the way out and, well, why not do some dancing.

I ran it by fish biologist friends when I got back and they had a good many possibilities, anywhere from frustration with parasites to perhaps an otter down there chasing fish.

Our fishing guide, Tom Farnum, says he’s seen that behavior plenty and figures it’s just springtime and we all get restless. Fish included. Something’s in the air so it’s probably in the water. Makes sense. Happy spring to you. Go splash around.