The Cactus Mountain fire burned around 8,000 acres, last I heard, on the Oregon side of Hells Canyon just a week or so ago.

Here’s the view from the Snake River, floating by just below Dug Bar. 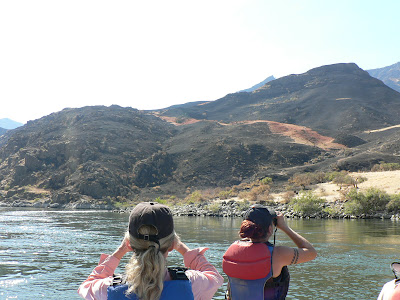 Lines of reddish-pink fire retardant around scorchy black grass fire remnants . . . should be nice and greened-up next year.

The botany mission was locate populations of….uh…..I want to say ‘spartina.’ Some grass with, well…it’s special, somehow. And has some thingies on top.

To be honest, I just row the boat and let the science talk wash over me because these botany folk speak a different language and I don’t comprende much.

Here’s a photo of Jerry with said grass: 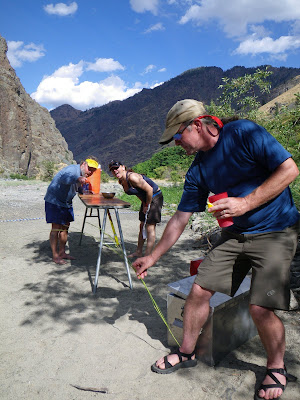 I do really dig these science floats down the river. We get to pull in to eddies and pockets we wouldn’t normally stop at and see some new aspects of the canyon.

Speaking of aspects, here’s one from the beach at Ragtown Bar, down from the Copper Creek Ranch. 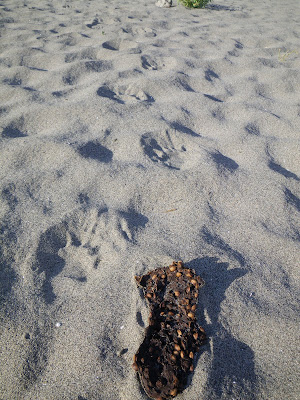 That was about 40 feet from where I’d spread out my bedroll and I was banking on this not being a usual corridor of travel for Mr. Bear. No evening visits, so it worked out.

Good wildlife trip. I fumbled for my camera when we floated in on an otter who had just got a carp or sucker in his clutches, but wasn’t quick enough on the draw and just ended up with this shot after he dove with his catch underwater. 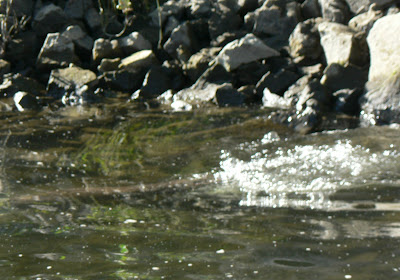 But I did get a nice action photo at dawn of Morgan Jenkins heading for the kitchen to put the coffee on. He’s awfully cheery for the moon still being out and no caffeine yet. 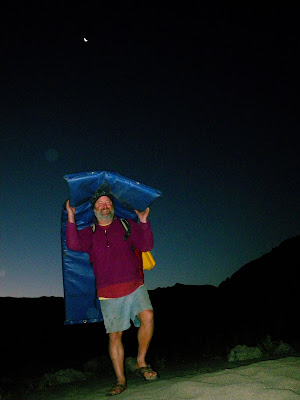 Hot enough to swim during the day and just right for t-shirts at dinner….mid-September treated us just right this time for conditions in Hells Canyon.

Now if the weather will just stay clear until I cut firewood for winter, the rain can open up and flush the steelhead up the river and everyone will be happy.