Our last foray through Hells Canyon was a work trip for Forest Service folk checking up on affairs down in the HC, which — if you haven’t heard – just happens to be THE DEEPEST GORGE IN THE LOWER 48 STATES, is all. Take that, Grand Canyon. Not so deep now, are you? Not only is Hells deeper in vertical feet, it’s one of the only canyons you can debate philosophical matters with, ranging from Sartre to Descartes to Heidegger. It’s deep, man.

It’s also home to some blackberry bushes that seem to be flourishing after the Battle Creek fire ripped through three years ago. That burned off all the other vegetation in certain places and the blackberries aren’t sharing well during the recovery, it turns out, in places like Sluice Creek, just above Rush Creek Rapid.

So the Servers of the Forest were assessing. Weighing options. Getting scratched by thorns. And also checking up on erosion, hydrology, rare plants . . . to be honest, I don’t understand much of what these nice people say because they speak in science-y talk, using science names for stuff that, frankly, I don’t savvy.

And they’re all — “Sorry. We’ll use common terms. You stepped in bear poop.”

But back to my point, which is that I’ve seen a lot of expensive raingear, splash gear, whatever you want to call garments that keep you dry. But nothing has surpassed the orange two-piece suit with beavertail connecting design sported here by Alan Miller, who, it is plain to see, has a keen eye for both fashion and functionality. 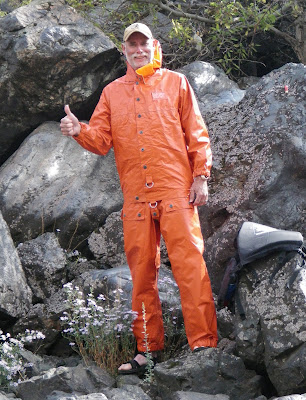 Seriously. That is one badass rain suit and I have tried to buy or steal it from him on several occasions but he is not to be swayed. Stick to your guns, Alan. I wouldn’t sell it to me either if I was me. Matter of fact, I know I’ve mentioned this suit before and maybe even put up a picture. Well, get used to it. I’ll sing it’s praises and put up pictures every time I come across this thing.

Next slide please. Ah, yes . . . here we have a photo showing a giant, upside-down spider about to attack my boat. Interesting. Fishing Dave caught lots of fish. He’s good at fishing. Here we see his batch of catfish caught in the eddy above Tryon Camp on the last night. His technique is not one I’ve heard before, and I will not divulge it out of professional courtesy. Well, whatever . . . he just puts a cut-up chunk of bait on a bare hook and throws it out on top of the water. That’s it. The catfishing I’ve done had weights and bobbers and lanterns involved. And I didn’t catch that many fish. Hm. Okey doke. 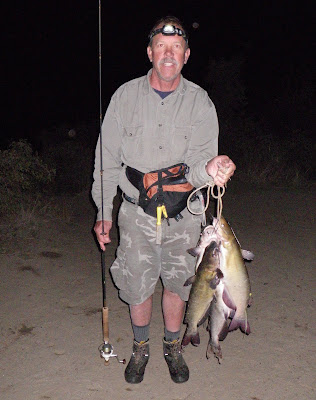 And finally, here’s a fitting shot to depict the winding down of the Winding Waters rafting season – laying on boats at the end of a trip to deflate tubes. When being lazy and doing something coincide it is truly a beautiful thing. 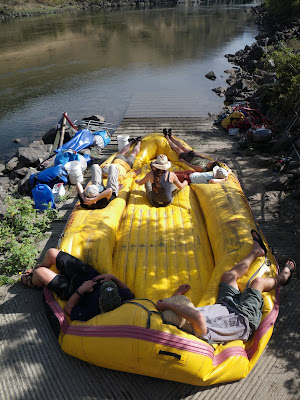