Something Steelheaded This Way Comes

Our man Tom Farnum has put his ear to the Grande Ronde River and cracked the code. He’s putting fishers onto fish, as you can plainly see in the photos here, taken in the last two days. 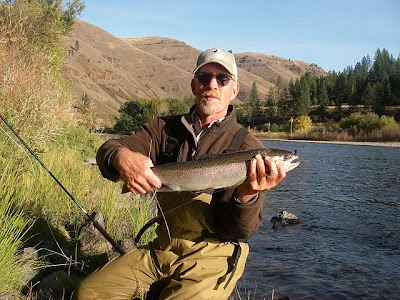 He’s got them on the swing, on the nymph . . . shoot, on a good day Tom can play ditties on a flute made from the butt section of a carbon fiber 7-weight rod and make the fish jump out of the water, doing a choreographed dance. Sea World tried to hire him away from us for just that trick, but this guy knows his home waters and he’s sticking to them. 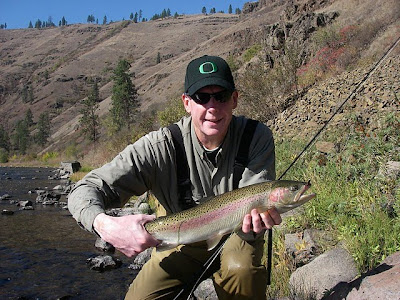 Morgan and I launch this Sunday for a camp-support trip on the upper stretch of the Grande Ronde, which means we float ahead and set up the wall tent and get dinner going for the fishermen who take their time on uncrowded waters in the roadless section of river. No crowds. Fish are running. Weatherman is predicting a little rain which should get them moving even more. Should be a fine time. Mighty fine.

Paul, Penny, Baby Linden and Morgan were over in Portland last weekend, attending the Plumper Farms Pumpkin Bash. Mo claims he hit a car waaaaay out in a field with a pumpkin flung from some manner of slingshot device. Stay tuned for footage of that, as I hear Paul is putting a video together.

River guide extraordinaire Caitlin Ecklund was also there flinging pumpkins. Morgan reports that she’s doing good and has, quote, “a bunch of ducks and goats,” at her place. Interesting.

Sam Macke is headed this way to join other guides Mike and Patrick Baird for a horsepacking venture up into the high country above the Snake River. They will be on the lookout for elk and hopefully it’s not quite as exciting as last year, when snow and a caved-in trail made for some nailbiting travel, including a horse nearly sliding off the path at one point. Good luck to you fellas.

Leaves are dropping and I’ve had my woodstove in service for the last three nights. Still nice and sunny out here in the Wallowas, though. It’s just brisk-ish in the evenings. Little frost in the mornings. Wish all of you happy acorn gathering before winter.

I’ll check back in with a report next week after our mission down the Grande Ronde.