They’re heeee-eeere. Ten minutes after landing this nice hatchery buck, another steelhead was hooked and landed by this same lucky guy Sunday morning. 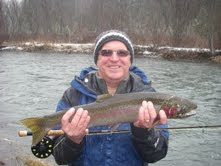 The second fish didn’t think much of the experience and wiggled free before his photo op. You could have been on the internet, fish. You missed out.

Fishing guide Tom Farnum says the fishing started out slow on the morning of Superbowl Sunday. Caught a whitefish after some nymphing, then got another tug shortly after and the flash they saw was no whitefish. Tom went for the net while this bad boy of a steelhead broke the surface a few times. Ten minutes later it was another good tug, another steelhead. A two-steelhead morning is nothing to sneeze at, especially when you consider they got back to town with plenty of time before the Superbowl kickoff.

Paul, Tom and I tried the waters last Friday and were just a few days early. We exercised some whitefish and a few rainbow trout, but didn’t raise a steelhead. Which I can’t understand. I wore my lucky sweater and everything. 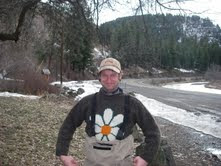 But I’ll be back out there now that we have proof positive the fish and river conditions are where we want them to be. See you on the river.